Wild Toro from ELK Studios: Slot Review - man vs bull, who will win?

Bullfighting is a famous sport from Spain that’s all about matadors who dance and dodge their way around some very aggressive bulls. It usually takes place in the middle of a packed out arena. Bullfighting is an extremely popular tourist attraction and this latest release from leading software studio ELK Studios focuses on an epic showdown between two fierce rivals who were once best friends. Toro is the champion bull of the arena and his challenger for the next event is his former best friend the sneaky Matador Diaz Jr. So grab a seat, take out some popcorn, and let’s see who is going to be leaving the arena in one piece!

Wild Toro is a 5 reel slot game with 178 ways to win that includes Walking Wilds, Respins, and a Toro Goes Wild Bonus Game. 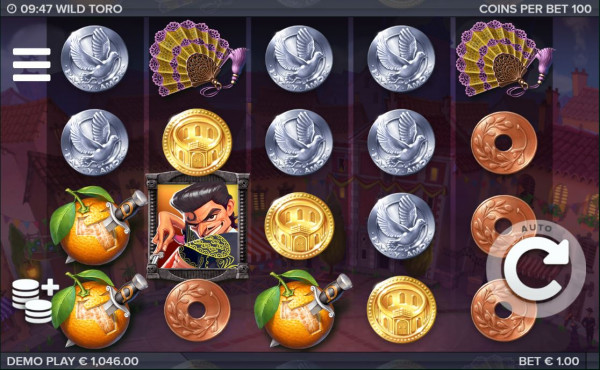 The first feature to highlight is that the game contains a jaw-dropping 178 ways to win which should provide players with ample opportunities to land a cash windfall on the reels. There are 2 Wild symbols in this game. The first Wild symbol is an image of the game logo. Like traditional Wild symbols, it substitutes for all other symbols except Toro and the Matador symbols to help form winning combinations on the reels. The other Wild symbol is illustrated by a picture of the bull Toro and only appears on reel 5. When this Wild appears, it will proceed to move from reel to reel giving you a respin from every reel move. This feature ends when Toro reaches reel 1 and you will receive 4 respins in total.

The Matador symbol is depicted by an image of Diaz Jr and only appears on reels 2, 3, and 4. When this symbol lands on any position when the Walking Wild feature is in play then the Toro Goes Wild Bonus Game triggers. In this fun feature, Toro will attack all of the Matadors leaving a trail of destruction as well as a trail of Wilds for the next respin. Toro charges at the Matadors vertically and then horizontally on the reels and only one Toro at a time can actively attack the Matadors. Once all of the Matadors have been beaten then the feature will end and Toro will finally relax and return to his normal self.

The final feature to discuss is the Matador Respin Challenge. This triggers when you land 3 Matador symbols on the 3 middle reels. Once activated, the Matador symbols become sticky with each of them giving you 1 Respin which means you get 3 Respins in total. Every additional Matador symbol that appears during this feature grants you an extra Repin. This feature ends when all Matador Respins are run or if Toro appears to take on the challenge which will, in turn, trigger the Toro Goes Wild Bonus Game.

The slot features a highly polished presentation as the game takes place in a market square in the centre of a quaint little Spanish village. Symbols are intricately detailed and consist of Toro, Diaz Jr, a Fan, a Rose, an Orange, and an assortment of coins. The animations are visually stunning as symbols are highlighted with an iridescent white glow when part of a winning combination. I especially enjoyed watching the thrilling sequence that occurs when Toro appears on the reels and charges at all of the Matador symbols to help give you a huge win on the reels. It's a real visual treat for the eyes!

The music is vibrant and full of dramatic Spanish guitar strums. It complements the fast-paced nature of the game really well.


Our Verdict on Wild Toro

This action-packed slot is made by ELK Studios and is a highly entertaining game to play. It's superbly presented, really easy to play, and contains the right amount of bonus features to keep the action ticking over nicely. I was able to trigger the Toro Goes Wild Bonus game quite regularly while playing and this can lead to some huge payouts from this feature especially when you trigger it while in the Matador Respin Challenge. It’s possible to win an incredible maximum payout of up to 2,250X on each spin when you play this game! Having said that, I did find this slot to be of High variance so you might have to endure a few dry spins before you eventually bag yourself a decent enough payout on the reels. For slots with a similar animal theme, check out Epic Ape and Big Win Cat.

Who will win? Toro or Diaz Jr? You decide when you play Wild Toro!