Oktoberfest is a world-famous beer festival that's celebrated in Munich from September to October every single year. Believe it or not but in 2017, a jaw-dropping 7.5 million litres of German beer were consumed by 6.2 million visitors over the course of the festival! To coincide with the launch of Oktoberfest for this year, popular games provider Booming Games decided to pay tribute to this wonderful event with this new online slot. So get ready to strap on some lederhosen and line your belly with plenty of German sausages as the mother of all beer festivals kicks off! 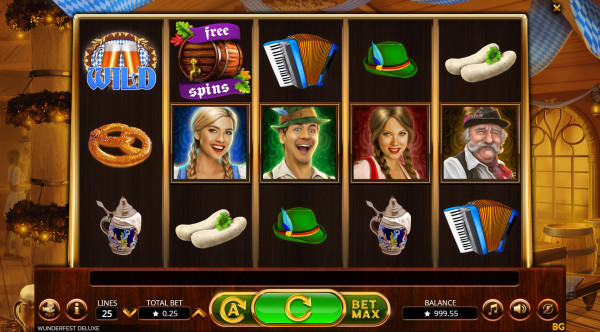 Wins are formed in this game by landing 3 or more matching symbols on the reels. The first 20 paylines pay left to right and the remaining 5 paylines are unusual as they are actually horizontal, pay from the top downwards, and only 3 symbols can land on them. When you form a winning combination with these 5 paylines then your win will be nicely tripled! This is known as the Vertical Multiplying Paylines feature.

The Wild symbol in this game is represented by 2 tall glasses filled with German beer. The main function of this symbol is to substitute for all other symbols except for the Scatter to help create winning combinations. Keep your eyes peeled for this symbol as it is the highest paying symbol in the game. Land 5 Wilds on an active payline and you will be toasting Oktoberfest with a fantastic payout worth 40X your total bet!

The Scatter symbol is depicted by an image of a wooden keg. Land 3 or more Scatters anywhere on the reels to trigger the Free Spins game. Once activated, you will be awarded 10 Free Spins. Unfortunately, it is not possible to retrigger this feature.

As you play the game you may notice some of the high-paying symbols expanding to cover an entire reel. This is called the Growing Majors feature and triggers when a win is formed from getting 3 identical high-paying symbols on a vertical payline. This feature is active during the main game as well as Free Spins.

The presentation of the game is superb as it takes place in a classic German Brauhaus that’s bathed in golden sunshine and filled with lots of wooden benches, beers, and of course kegs! Symbols are nicely designed and consist of a bunch of Male and Female drinkers as well as lots of Oktoberfest paraphernalia such as Beers, Hats, Tankards, Kegs, Pretzels, and Sausages. The animations are smooth as symbols burst into life and enlarge when part of a winning combination. I especially like when the symbols expand to cover a reel when you trigger the Growing Major feature. It's a nice visual touch.

The music features a classic German backing track filled with lots of accordion sounds. It matches the gameplay really well.


Our Verdict on Wunderfest Deluxe

Wunderfest Deluxe is made by Booming Games and is a fine tribute to perhaps the most popular beer festival in the world. It’s easy to play, features bright and colourful graphics, and a jaunty soundtrack to really get you in that Oktoberfest mood. In terms of bonus features, there is plenty of fun to be had in this slot. The unique Vertical Multiplying Paylines triple your payouts nicely and I was able to rack up quite a few decent wins with high-value symbols expanding to reward you quite handsomely with the Growing Majors feature. The Free Spins bonus game can take a bit of time to trigger and it is a real shame you cannot retrigger this feature. Variance-wise, I found this slot to be Low so it won’t take you too long to land a decent cash payout on the reels. For a slot with a similar Oktoberfest theme, check out the superb Oktoberfest Spins.

Drink your way to a beer-filled fortune when you play Wunderfest Deluxe!