Asgardian Stones from NetEnt: Slot Review - the gods await you!

A wall of huge mystical stones is all that stands in your way of reaching the shining city of Asgard.
asgardian stones casino game review netent slots

Norse mythology is a very popular theme that has been explored countless times before by software producers all across the world as it is an ancient time where powerful gods and magical creatures existed. This latest release from acclaimed software studio NetEnt invites players to the mythical land of Asgard which is the birthplace of the Norse Gods and is ruled by the all-mighty and powerful King Odin. Find the strongest hammer available and prepare to smash through some huge stones to see if this gateway to the gods will reward you kindly. 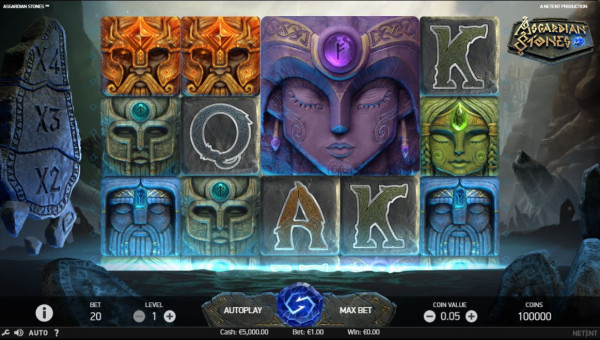 The first feature to highlight is the game features Avalanche Reels which is very similar to other NetEnt games such as Gonzo's Quest. The symbols on the reels in this game will fall into position and when you form a winning combination then you will trigger an Avalanche as winning symbols will explode and disappear to be replaced by new symbols. This lets you win again and again provided that you keep landing winning combinations on the reels.

The Wild symbol in this game is represented by the letter ‘W’ and like most Wild symbols, its main function is to substitute for all symbols apart from the Bonus Wheel symbol. Asgardian Gods also features Colossal Symbols which are huge versions of regular symbols and can appear as blocks of 2x2 or 3x3 symbols to really boost your chances of landing winning combinations more easily. During an Avalanche, when a Colossal Symbol lands then any remaining empty spaces are filled with regular symbols. Unfortunately, it is not possible to have 2 or more Colossal Symbols appear at the same time on the reels.

When an Avalanche occurs, the Colossal Crush feature can randomly trigger. When this happens, a Colossal Symbol can crush extra rows of symbols underneath it to help form even bigger wins. For each row the Colossal Symbol crushes, the multiplier value will increase by 1. Depending on how many symbols you crush, it's possible to reach a maximum multiplier of 4X.

The Bonus Wheel feature is triggered when you land all or part of the Bonus Wheel symbol on the last 3 reels. This symbol is illustrated by a huge 3x3 block displaying a wheel image. Once triggered, it will spin in place and a maximum of three wheel segments will highlight. You can win coin wins up to 5X your initial bet or 5 Free Spins. It is possible to win up to 15 Free Spins if all Free Spins segments are highlighted. You can also retrigger the Bonus Wheel up to 3 times to give you a maximum total of 25 Free Spins. In Free Spins, the Wild symbol is now a Colossal Wild symbol and if it is part of a winning combination then it will break into 1x1 Wild symbols and explode to be replaced by new symbols. If you don’t land a winning combination with Wild symbols present then they will remain on the reels until you do.

The graphics are absolutely fantastic and what you would expect from leading software provider NetEnt. The game takes place inside a glowing mystical pool of water with a large slab of rock floating beside the reels and you'll notice a majestical image of Asgard in the background. Symbols are wonderfully detailed and consist of Odin and a few Asgardian Gods as well as the standard A – Q icons. The animations are spectacular as symbols smash and thud together on the reels and there is something really satisfying about it especially when they explode to trigger an Avalanche.

The music is eerie with lots of loud smashing sound effects when the symbols fall on top of each other. It matches the fast-paced gameplay superbly.


Our Verdict on Asgardian Stones

Asgardian Stones is made by NetEnt and to be honest is one of the best Norse-themed games I have played in quite some time. The game is visually stunning to look at and even better to play. The Avalanche reels ensure every spin captures your attention and with the addition of the huge Colossal Symbols, there is plenty of opportunities to land some massive cash prizes. I was able to trigger the Free Spins game quite a few times while playing and you can land some huge payouts thanks to the appearance of Colossal Wild symbols in this feature. I found this slot to be of Medium variance so thankfully you won’t have to wait around too long until you land a good enough payout on the reels. With a maximum payout of 2,000X which can be won any spin, what is stopping you from visiting Asgard right now? For slots with a similar Norse theme, check out Viking Runecraft and Hall of Gods.

Smash your way to a heavenly fortune when you play Asgardian Stones!