This unusual Chinese themed slot comes from Lightning Box Games and centres on an adorable pug living in China who has ambitious plans to visit the moon and go on a space adventure! There is a method to the madness of this theme as pugs were originally brought to Europe from China in the 16th century so it is rather apt that it takes place in a Chinese setting. This game is also a follow-up of sorts to the popular Lightning Box Games slot Astro Cat. Without further ado, let’s join the Astro Pug and see just far into space he is willing to go?

Astro Pug is a 5 reel slot with 1,296 ways to win that comes with Free Spins, Mega Spins, Locked Wilds, and Bone Multipliers. 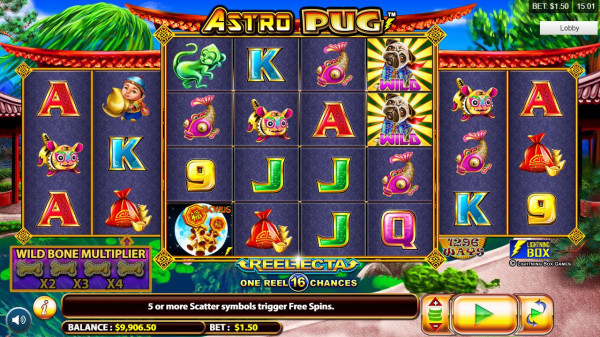 The first feature to highlight is that it features an unusual reel structure where the middle reel contains a giant symbol that covers 16 positions on the reels. This is known as the Reelfecta feature. In this feature, each symbol can only be used once per winning combination. Astro Pug also offers a staggering 1,296 ways to win with wins being formed when you land matching symbols on the reels with positions containing the winning symbol used to determine the win for these symbols.

The Pug, of course, is the Wild symbol and appears only on reels 2, 3, and 4 in the main game. This symbol replaces all other symbols apart from the Scatter and other Wilds to help form winning combinations on the reels. There is also a Bone Multiplier Wild symbol that can show up on reel 2. When it appears then it will become a 2X, 3X, or 4X Wild Bone Multiplier for any winning combinations it substitutes in to further increase your chances of landing a big win on the reels.

The Scatter symbol is represented by an image of a full moon with a red Chinese decoration displayed inside. Land 5 of these symbols on the outer ring of the Reelfecta reel to trigger the Free Spins feature. You will then be awarded between 3 and 12 Free Spins. During each Free Spin, a reel will display either a +1 Wild or a Bomb symbol. They will begin to appear from the top left corner of the Reelfecta reel and move clockwise on every Free Spin. If you land the +1 Wild symbol then the symbol will lock into place and you will receive an extra Free Spin. If you get the Bomb symbol then the feature will end but you will be awarded a payout worth 2X your total bet. Thankfully, the Bomb symbol cannot appear during the first 3 Free Spins in this feature.

While in Free Spins, if you manage to fill all 12 outer positions with Wilds then you will be awarded 1 Mega Spin. This highly lucrative spin covers all 16 positions in the Reelfecta, transforming all symbols into Wilds! You will also notice a special Red Pug symbol which can appear on reel 3 during Free Spins and this symbol is an additional Wild which substitutes for all other symbols apart from the Scatter and other Wilds.

The graphics are bright and colourful with just a touch of crazy! Astro Pug takes place in front of a beautifully designed red Asian temple with tall trees in the distance and a bright blue sky overhead. If you look closely, you will even notice a small pond covered with lilies in front of the temple. Symbols are nicely designed although a bit odd and consist of a Pug, a Bone, a Boy, a Monkey, a Fish, a Red Sack, a Moon, and the standard A – 9 icons. The animations are stylish as symbols breathe into life when part of a winning payline. It’s fantastic when you get a big win on the reels as the screen is splashed with an array of gold coins.

The music is soft and melodic with a beautiful Asian backing track. It complements the Chinese theme of the game superbly.


Our Verdict on Astro Pug

This game is produced by Lightning Box Games and although it is a strange take on the Chinese theme, it is extremely fun to play. Astro Pug features beautiful graphics, a soothing soundtrack, and just the right amount of bonus features to keep the excitement levels ticking along nicely. The Reelfecta game engine is unique, to say the least, and offers something different to more traditional online slots. The most rewarding feature of the game is the Free Spins feature as you can land Extra Spins and Locked Wilds to further increase your chances of bagging a big win. Variance-wise, I found this slot to be Medium so it won’t take you too long to make a tidy little profit on the reels. For slots with a similar Chinese theme, check out Gong Xi Fa Cai and Dancing Dragon Spring Festival.

Launch off into space with a cute little dog to win massive cash prizes when you play Astro Pug!