At the Copa from Betsoft Gaming: Slot Review - and now for a night of music and dancing

Slot games are often similar to one another. At the Copa by Betsoft Gaming is different. It's progressive jackpot system is well-designed, its graphics are outstanding finds this GamingRevolution slot review.
at the copa betsoft gaming casino game review slot machine slots

At the Copa, have a guess what this slot game is all about? Of course, it’s all about the Latin spirit, dancing, cocktails and other sun-kissed characters. The slot game by Betsoft begins with some seriously impressive graphics, rivalling Pixar and the like. At the Copa, of course, that’s the Copacabana, it is Carolina who is the main character, and leads you into a fun-filled world. 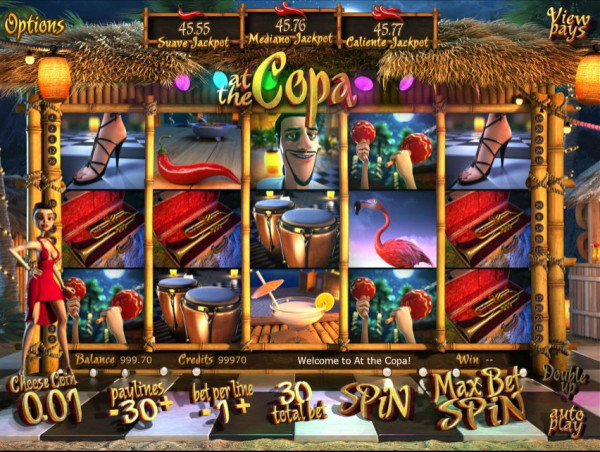 Aside from the impressive graphics, one of the best game features in At the Copa are the jackpots. Five chilli pepper symbols trigger the jackpot. Three different jackpots can be won, the largest is 430,000 coins. Which jackpot you hit depends on the location of the chillies.

The Suave Jackpot is unlocked when a player gets five chillies anywhere on the reel. This means there is never any disappointment when players receive the chillies. The next biggest jackpot, the Median Jackpot, is hit when a player receives five chillies on lines two or three. The chances of hitting that jackpot, as you can imagine, are still fairly high. While more tricky, but also totally achievable, it takes five chillies on payline one to unlock the gigantic Caliente Jackpot. Know why I love this bonus feature? The obvious appeal is that the three different jackpot levels heighten the chances of winning at least one of them.

This jackpot is also progressive, meaning the longer you play and the more you bet, the more the jackpots grow.

Another fabulous feature is the bonus game, a dance competition. Three dancers in a row, with the lady in the middle, initiate this game. Pick one of the male dancers, see if he wins the competition. If you picked the right one, a bonus prize awaits.

The theme song is fittingly Latin, the colour-scheme warming. The background depicts a beach bar in the evening, with orange light warming the counter and the dance floor. The reels and rows are bordered with expertly designed bamboo, and if you hit the spin button, Carolina, in her little red dress, looks expectantly at the reel.

The bigger your bet, the longer you play, the higher your chances of winning big. At the Copa does offer fair rewards for taking risks. However, as with any game of chance, you could be just as lucky with a tiny stake. Betsoft has managed to create a slot game, which caters for both high rollers and risk-averse players. For that reason, I would suggest playing amounts you are comfortable with. Sometimes, you may fancy a single spin, other times, you may want to play the slot game for an hour or so, in which case you want to make your funds last.

Our Verdict on At the Copa

At the Copa is an outstanding slot game, which offers high winnings but also good solid smaller wins. However, if there is one thing that makes this game stick out among an array of online games, it's the graphics in the game. Alone for that reason, At the Copa is a must-play.