Visit a small Mexican village to celebrate the mother of all fiestas in this amazing slot!
betsoft gaming casino game review chillipop slots

Head to a sunny Mexican village south of the Rio Grande in this new release from award-winning software producer BetSoft Gaming. ChilliPop is all about taking part in a colourful fiesta where hitting piñatas and making the perfect salsa is key to landing big wins! You will find all the ingredients here to help you cook up a storm on the reels including an assortment of cute peppers, onions, tomatoes, and leeks. All that’s left to do now is join us as we have some fiesta fun and start cooking, to hopefully land a big spicy payout in this game!

ChilliPop is a 5 reel Cluster Pays slot that includes Wild Multipliers, Free Spins, A Buy feature, and a Double Up bonus game. 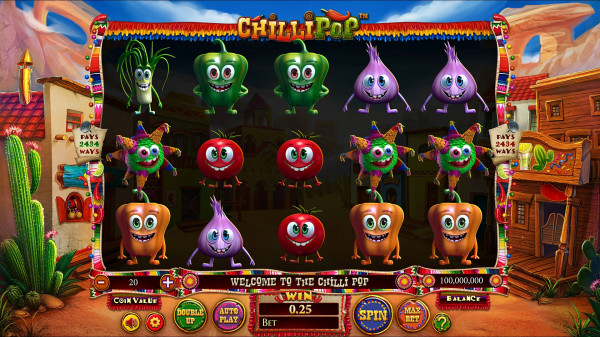 The first feature to highlight is that the game features a Cluster Pays mechanic where wins are formed by landing 3 or more clusters of the same symbol either horizontally or vertically. When you form a win on the reels then all the clusters will explode apart from the Mule cluster. This is known as the Exploding Wins feature and the great thing about this feature is that new symbols will drop into place on the reels to replace winning symbols to help award additional wins!

A bright and colourful Piñata is the Wild symbol in this game and its main job is to substitute for all other symbols except the Mule symbol to help form winning combos on the reels. This symbol also gives you a multiplier for each individual cluster. The multiplier is one added to the total number of Wilds in the cluster. To clarify this, say you have a cluster of 5 symbols and 3 of them are Wilds then a 4X multiplier will be applied to that cluster. Manage to fill all of the cells with Piñatas then you will be awarded a gigantic Bonus Win.

The Scatter symbol is represented by a Mule wearing a sombrero. Land 3 or more of these symbols to trigger the Free Spins Bonus Game. The interesting thing about this symbol is that it does not explode like other symbols during Cluster Pays which means you can earn more Free Spins by landing additional Mule symbols on the reels. For example, it is possible to get up to 26 Free Spins for having 15 Mule symbols on the screen at once. The minimum number of Free Spins you can receive is 5 from 3 Scatters and as you land additional Scatters then the reels will proceed to expand to give you even more ways to win. Incredibly, the reels can expand to a massive 8x8 structure which means you can have a whopping 64 symbols in total appearing on the screen! You can keep an eye on your progress as to how many Scatter symbols you need to expand the reels thanks to a handy Mule Meter which can be viewed on the left-hand side of the reels.

If you are finding it hard to trigger the Free Spins feature then you can always activate it automatically by clicking on the Buy Feature button located at bottom right-hand corner of the reels. This of course will require to pay for it with the Bet Cost displayed inside of the Buy Feature button. As soon as you buy into the Free Spins feature then you will be given 10 Free Spins and the feature will trigger instantly.

The final feature to mention is the Double Up game which is an optional bonus game that triggers whenever you form a win on the reels. In this risky but exciting feature, you can gamble half or all of your winnings by choosing the heads or tails of a rotating coin. Guess the side of the coin correctly and you will double your winnings! You can gamble as many times as you like but a word of warning to tread very carefully here as if you pick the wrong side of the coin at any time then you will lose all your current winnings and the feature will end.

The graphics are visually stunning and what we have come to expect from BetSoft Gaming nowadays. The game is set in a charming Mexican village with a bright blue sky overhead and cacti and cosy little houses just below it. Symbols are superbly designed and consist of a range of vegetables such as Bell Peppers, Chilli Peppers, Leeks, and Tomatoes. Each vegetable has big eyes and a mouth to give them a bit character and actually look strikingly similar to minions of all things! The animations are excellent as symbols plop down on the reels and explode in spectacular fashion when part of a winning combination. A special mention for the Free Spins game as the animations are superb here as the reels expand to feature a massive amount of symbols as high as 64 on screen at once!

The music is lively and features a Mariachi-style backing track. It ties in nicely with the Mexican theme of the game.

The game features a Cluster Pays system, an average RTP of 96.08%, and a maximum payout worth 2,067X your stake.


Our Verdict on ChilliPop

BetSoft Gaming made this slot that’s a one fiesta definitely worth attending! ChilliPop features fantastic visuals, a catchy soundtrack, fast-paced gameplay, and more bonus features than you can shake a piñata at! The Cluster Pays mechanic works like a charm and is nicely aided by the Piñata Wild symbol which can boost payouts considerably by adding big Multipliers. A minor gripe would be that it can take some time to trigger Free Spins but it is definitely worth the wait, as you can expand the reels to display up to an incredible 64 symbols at once which gives you plenty of potential to land huge cash payouts. The Double Up game also adds to the excitement but we advise players to collect your money fast if you go on a hot streak here! In terms of variance, I found this slot to be Medium so it won’t take you that long to string a few wins together on the reels. For slots with a similar Mexican theme, check out Mexico Wins and Beautiful Bones.

Land a hot and spicy fortune on the reels when you play ChilliPop!