Love sending emojis to your friends and family? Then check out this cool game that's all about them!
casino game review emoji planet netent slots

Emojis or emoticons began life as colourful images that people used in Japan to communicate with each other on their mobile phones in the late 1990s. Nowadays, emojis are mainstream and are an acceptable form of communicating with other people that is of course if you cannot be bothered writing any text and feel an emoticon sums up your thoughts nicely! With the summer release of the Emoji movie, there seems to be a craze for emojis right now and NetEnt noticed this trend so they decided to release this slot to appeal to all emoji fans out there. 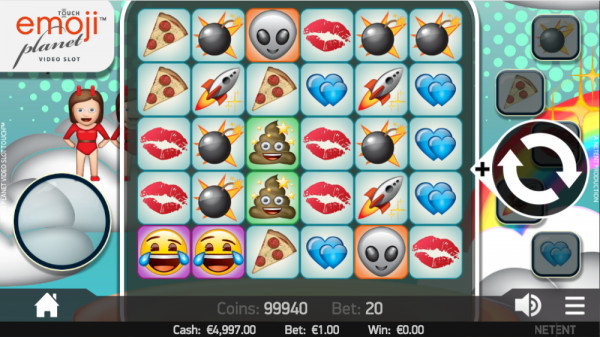 The first thing to highlight about this game is that it features Avalanche reels. In a nutshell, these are reels where symbols fall into place rather than spin like most standard reels. To land a winning combination, you need to form clusters of 5 or more matching symbols, the more symbols you get then the bigger your wins become. When you land a win, the winning symbols will explode and are then replaced by new symbols. This gives players the opportunity to land consecutive wins provided that matching clusters keep appearing on the reels. The Avalanche feature can also be found in NetEnt’s classic slot Gonzo's Quest.

The Wild symbol is represented by a yellow star with the word ‘Wild’ below it. Like most Wild symbols, it substitutes for all other symbols except to help form winning combinations on the reels.

As you play the game, you will notice some emoji icons to the right-hand side of the reels. These are Emoji meters and they fill up each time you get a win. Once an Emoji meter is filled with 12 spaces then the corresponding Emoji feature will trigger. The 5 Emoji features consist of the following:

The graphics are absolutely outstanding from the fantastic intro video right through to the lively animations that play out behind the reels. You will notice floating red balloons, dancing emoji devil girls, a colourful rainbow, a disco-style background and if you look really closely you will even see Gonzo pop up from time to time who is the star of the NetEnt slot Gonzo’s Quest. It is certainly one busy looking slot! Symbols consist of a variety of popular emojis including a Crying Face, a Pizza, a Bomb, a Rocket, a Red Lipstick Kiss, and of course the obligatory Poop icon! The animations are superb as symbols pop and explode leaving a nice trail of stardust whenever you form a win on the reels.

The music is poppy, catchy, and full of light techno sounds. It complements the zany theme of the game perfectly.


Our Verdict on Emoji Planet

This slot is produced by acclaimed software producer NetEnt and it is a really fun game to play. When you play this slot, you will realise straight away that it is not your typical online slot thanks to the excellent Avalanche feature. These reels can provide huge payouts especially when you consider that you can win as much as 5,000X your bet on each Avalanche! The 5 Emoji features also keep things interesting as they force you to keep a close eye on the 5 different Emoji meters as you play the game. I found this slot to be of Medium variance so you won’t have to wait too long until you bag yourself a nice payout.

Avalanche your way to a massive win in Emoji Planet!