Open a portal to a dimension full of magical riches when you flip the pages of the Golden Grimoire!
casino game review golden grimoire netent slots

Take a mind-bending trip to a whole new dimension in this new title from leading software provider NetEnt! This slot revolves around a very special book known as the Golden Grimoire. The word “Grimoire” actually originates from French which refers to a mysterious book that can summon spirits as well as cast powerful magical spells. It is said if you are able to successfully decipher this old book then you will be taken to another world filled with riches beyond your imagination. Let’s see if we can cast the right spell to open a portal to this dimension to bag ourselves a nice cash payout? 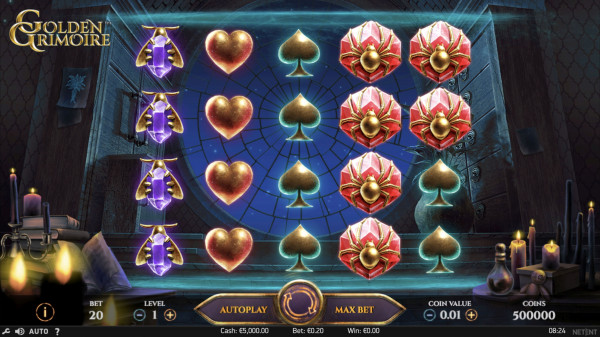 Golden Grimoire features a bunch of strange symbols that feature various insects surrounding sparkling gemstones. Keep a close eye out for the spider red gemstone symbol as it is the most valuable symbol in the game. Land 5 of these symbols on an active payline to conjure a fine payout worth 5X your original bet.

Like most online slots, this game comes with a Wild symbol which is depicted by a Golden Skull. This symbol typically substitutes for all other symbols apart from the Scatter and Mystery symbols and only appears in the game when it is part of a Mystery Symbol transformation.

The Scatter symbol in this slot is represented by the word ‘Scatter’ surround by bright orange magical shapes and patterns. This symbol only appears on reels 1, 3, and 5 and if you happen to land 3 of these symbols on the reels then you will trigger the Free Spins bonus game where you will receive 8 Free Spins. In this excellent bonus feature, the Mystery symbols are replaced by Sticky Mystery symbols which can appear on reels 2, 3, 4, and 5 now. These symbols when they appear will lock into place for the duration of the feature and if one of these symbols transforms into a Wild then it will change into a lucrative Sticky Wild which will also remain in place for the entire feature.

Like most NetEnt games, this slot features a highly polished presentation as it takes place inside of a mystical room at night with candlelights illuminating the reels along with an ornate window frame just behind the reels. It looks just like the Sanctum Sanctorum where Doctor Strange from the Marvel universe lives! Symbols in the game are intricately designed and consist of colourful gemstones featuring golden insects as well as classic Heart/Diamond/Spade/Club playing card icons. The animations are slick as symbols burst into life by enlarging and shining brightly when part of a winning payline. It’s a real visual treat when Mystery symbols show up on the reels as they proceed to rotate symbols rapidly to magically transform them into a randomly chosen symbol.

The music is atmospheric and moody and features lots of eerie whispering sound effects. It ties in rather well with the Magic theme of the game.


Our Verdict on Golden Grimoire

Top software developer NetEnt produced this game and it is a fun and magical gaming experience we highly recommend checking out. Golden Grimoire features top-notch visuals, a tense soundtrack, along with an exciting range of bonus features. The Mystery symbols certainly keep things interesting on the reels but it is the Free Spins bonus feature which is the star of the show here. In this rewarding feature, you can benefit greatly from lucrative Sticky Wilds but sadly it is not possible to retrigger more Free Spins. When it comes to variance, I found this slot to be Low so you will land a steady stream of wins on the reels but they will tend to be quite small. We should also mention that the top prize for this game is 200X your original bet which can be won on every spin provided that you fill the reels with the spider red gemstone symbol. For slots with a similar Magical Book theme, check out Book of Oz and Rich Wilde and the Book of Dead.

Strange Spins and Mysterious Wins await those who open the Golden Grimoire!