Haunted House from Microgaming: Slot Review - test your nerve and leave with the goods

Haunted House is a 5-reel slot machine by Microgaming. This GamingRevolution blog has tested the game and found some of its features - especially its bonus game, the Full Moon Money Trail - rather exciting.
casino game review haunted house microgaming slots

Microgaming released its slot game Haunted House around Halloween. Despite Halloween being long over, the slot game continues to be popular among players. It seems that there is no such thing as a season when it comes to horror. As I imagined, this slot machine is dark. In fact, it’s super dark. Conversely, the background is super pink and depicts a dark, dark tree – supposedly in the haunted house’s garden. 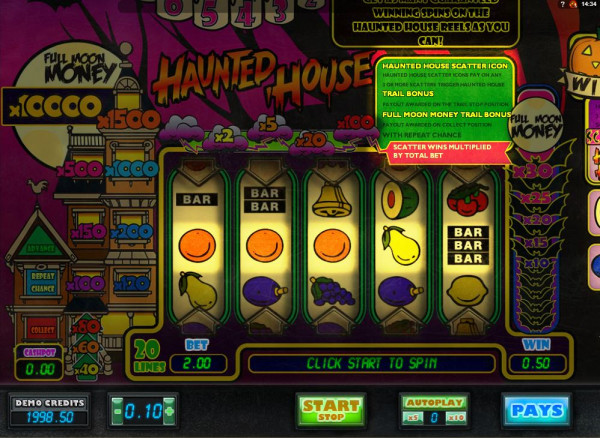 First things first, the game comes with twenty paylines. These are not optional, but form part of the game at all times. Next, the slot machine Haunted House comes with an array of bonus symbols. The Haunted House symbol, for example, is the scatter symbol in this slot game. This symbol is among my favourite features in the slot game as it is neither overly complex, but also fairly profitable. When a player receives two of these, he wins a prize of two times his total bet, when he receives three of these symbols that amount increases to five times his bet, and when it comes to five of these symbols, he will receive a hundred times his bet. That is pretty amazing.

While this feature is rather simple, the Full Moon Money Trail adds a little more excitement to the game. Some symbols in Haunted House have numbers on them. With every number a player receives, he advances up the Full Moon Money trail, which hands out monetary rewards to players as he progresses. Five, for example, give players a prize equivalent to ten times his line bet, whereas nine gives him thirty times. Of course, there is more to it. Ten gets players into the Haunted House, where he can play an interactive game. Lights are flashing, big prize multipliers, as well as ‘collect’ and ‘hit’ buttons, form part of the game screen. Players need to press ‘collect’ when it seems right, and with a little luck, collect a top prize worth 10,000X your wager!

Graphically, the Microgaming slot machine isn’t that overly impressive. However, as most seasoned players will admit, some 3-D and video slots aren’t always the best games when it comes to keeping the concentration levels high. Unlike in most slot machines, also those by Microgaming, Haunted House displays its buttons and paytable to the left-hand side, as opposed to below the 5 reels in this slot machine. The numbers and writing in this slot machine are illuminated in bright green, making it easy on the eye.

Surprisingly, the symbols in this slot machine are not overly spooky but follow a traditional fruit machine design, and include lemons, oranges and even the classic ‘bar, bar, bar’ symbol. So far, Haunted House seems neither there nor here - at least when it comes to graphics.

The game offers pretty good rewards. During the base game, however, the winnings aren't gigantic. For that reason, if a player wants to win big, he better up his game in terms of his stake. Despite this, I would not recommend wasting casino funds if you feel this game isn't giving you the rewards you desire. As per usual, sit back and see how the game treats you. Setting aside a set percentage can be helpful. This means a player can continue risking a little money, but he will never lose it all. Given the excitement the bonus game offers, I personally do not use the auto spin option. This, however, is up to player preference.

Our Verdict on Haunted House

Haunted House is a funny one. I expected a much more spooky design. On the upside, I was surprised to find that the casino game comes with a pretty cool, and unique feature, the Full Moon Money Trail. Collecting points and piling them up, reminds a little of typical cash rewards schemes - and who doesn't love them? Haunted House certainly comes with chances for some big wins. These, however, don't come by that frequently. With that in mind, the slot game certainly appeals more to those that are in it for the money.