Jim is on the hunt for the mythical city of El Dorado. Can you aid him in his quest and find all that treasure from the lost city of gold?
casino game review jungle jim el dorado microgaming slots

This game is based on the title character aptly named “Jungle Jim” and his hunt for the fabled city of gold El Dorado.

It puts you right into the heart of a South American jungle with a distinct Aztec vibe.

One thing that I noticed straight off the bat was that Jungle Jim’s look was definitely inspired by Nathan Drake of the hugely successful Uncharted computer game series.

It is a 5 reel slot game and is jammed full of features including free spins, rolling reels and multipliers. 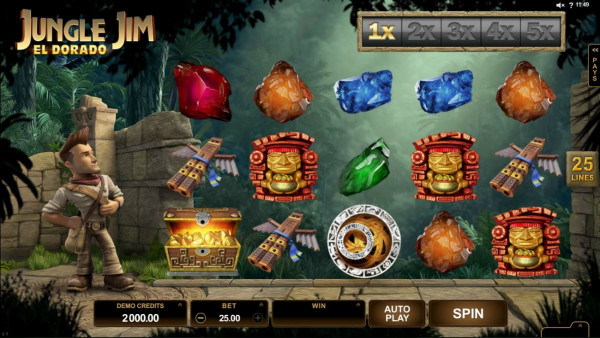 The first cool feature I encountered while spinning the reels was the Free Games feature. You have to land 3 Scatter symbols on reels 1, 2 and 3 in order to trigger it. It will award you with 10 free spins. Not a bad reward at all for venturing into a dangerous jungle!

Then there is the Multiplier Trail feature which increases after every spin. The first spin will have a multiplier of 1X and goes up to 2X on the next spin. In the base game this can go as high as 5X and in the Free Spins game it can up to an amazing 15X!

This game also features Rolling Reels which means as long as winning combinations are made, the winning symbols will be replaced by new ones and this offers you a great opportunity to win really big if you keep on consecutively winning.

The game is slick and has a very polished presentation with cool 3D effects. The graphics are wonderful as rain drops on a lush Jungle background as Jim swats a fly on his face as the symbols run up and down the reels.

As mentioned before, Jim’s appearance is clearly inspired by Nathan Drake. Not that this is a bad thing as Drake was quite good at finding treasure to start with!

The music is filled with animal noises as birds chirp and rain hits the ground. It really compliments the game quite well and adds to the jungle atmosphere.


Our Verdict on Jungle Jim

Jungle Jim is produced by Microgaming and it is one of the best jungle-themed games that I have played in quite some time. Some folk will say that it is quite similar to Gonzo's Quest and I can see that point but I think they play a little differently.

It has a very likeable hero and with features such as rolling reels and the multiplier trial, there is scope for some huge payouts.

Find El Dorado and help Jim bring back all that booty!