Legends of Africa from 2by2 Gaming: Slot Review - join us on a trip to the Savannah

GamingRevolution has reviewed one of 2by2 Gaming's latest slot additions called Legends of Africa. The online game is reminiscent of a traditional fruit machine in terms of its payline system and bonus feature, which primarily includes free spins.
2by2 gaming casino game review legends of africa slot machine slots

2by2 Gaming recently released its Legends of Africa slot game, for both for mobile and desktop. 30 paylines are available on 5 reels, which are organised in a type of diamond-shaped row combination.
Few will be surprised to hear that Legends of Africa is also available in brick-and-mortar casinos. If you haven't yet had the chance to play the slot game, traditional is a good way to describe the game. 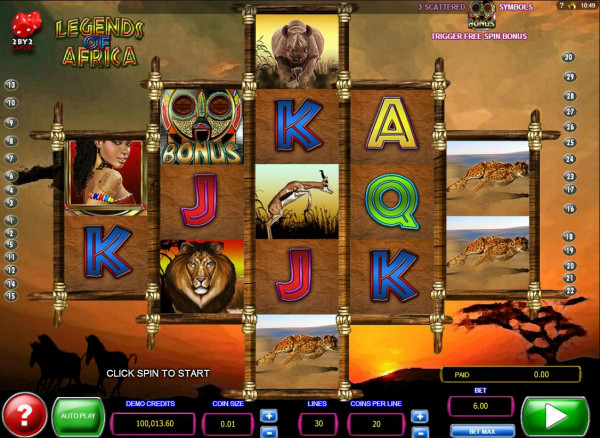 Top Casinos for Legends of Africa

The slot game, Legends of Africa, comes with several bonus features. Among them is a bonus game, which is activated when a player receives at least three African mask symbols on reels two, three and four. Before the bonus game launches, the player is asked to take his pick from the masks, and this mask will reveal the number of free-spins awarded.

While this is sure the most profitable little extra feature in the game, 2by2 Gaming’s Legends of Africa also comes with a so-called mystery position. This results in a symbol being randomly replaced before the reel even comes to a halt. Pretty exciting!

More Bonuses for Legends of Africa

The background that greets players is - unsurprisingly - the African savannah, and the general design closely follows other popular 2by2 Gaming slot machines.
The design, while rather well-executed, does not feature funky 3-D images. This, however, only adds to the retro feel when playing this slot game.

Legends of Africa comes with 30 paylines, and is fairly classical in design. I tend to make use of the Autospin option. Simply, because the slot game is so simple. There is little need to make changes as you play. With fairly good, but not gigantic winnings, Legends of Africa is best played at a comfortable stake. Risk it, if you can afford to loose it.

Our Verdict on Legends of Africa

The online game certainly is more for fans of traditional slot machines. In Legends of Africa players will not find an innovative design or complex payline systems, instead, they find a slot game which is traditional but enchanting due to its bright - yet old-fashioned - graphic design. The warm colours in this slot game's design are a pleasant break from the dark themes 2by2 Gaming creates frequently.