Motörhead from NetEnt: Slot Review - will you win some or lose some?

Get ready to rock and roll as you join Lemmy and the rest of the band on stage!
casino game review motörhead netent slots

When you think of heavy metal music, the band Motörhead automatically spring to mind. This rock band was formed in 1975 by singer and songwriter Ian Fraser “Lemmy” Kilmister. Motörhead were often seen as pioneers of the Rock and Roll industry as they brought heavy metal back to the mainstream in the late 1970s and early 1980s. The band released 23 albums in a long and storied career that spanned for over 40 years. Sadly, Lemmy died in late 2015 so the other members of the band decided not to continue anymore. NetEnt decided to release a slot to pay homage to this legendary band so get ready to crank up the volume, tune up your air guitar and join the band on stage!

It is a 5 reel slot with 76 paylines and comes with features such as Free Spins, Wild Substitutions, a Bomber Feature, and a Mystery Reel mode. 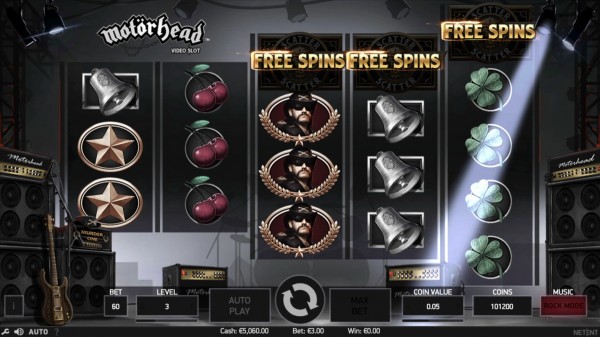 The first feature to mention is the Wild Symbol which is illustrated by an Ace of Spades image, this is a nice tribute to one of the band's most memorable songs. The symbol substitutes for all other symbols in the game except the Scatter symbol.

As you play the game, you will notice 1 or more reels will sometimes feature a stack of Golden Demon Head symbols. This is what is known as the Mystery Reels Feature. Mystery Reels consist of a stacked reel of mystery symbols and regular symbols and once these reels stop, they transfer into 1 random symbol except for the Scatter symbol.

The Bomber Feature is a random event that takes place in the main game before you spin the reels. You will notice it straight away as a number of bombs will blow up the reels, creating at least 10 overlay mystery symbols. The reels will then spin with a symbol being chosen in the same way as the Mystery Reel Feature.

The Scatter symbol is represented by a golden badge with a demon’s head inside of it. If you land 3 or more of these symbols on reels 3, 4, and 5 then you will be awarded 10 Free Spins. A pleasing aspect of this feature is that the Mystery Reels and Bomber Features will contain Wild symbols. There is potential for some huge wins when in this game, especially if the randomly chosen symbol is a Wild symbol from the Mystery Reels feature.

The slot is a fine tribute to an iconic rock band as it features some amazing graphics and effects. The moment you load the slot, you will be treated to a fantastic video clip of the band performing on stage as “The Ace Of Spades” is belted out. It is a great little introduction to Motörhead and sets the tone nicely for playing the game. The backdrop of the slot is a live music stage with speakers, flashing lights, and musical instruments. The symbols consist of Lemmy and a few classic fruit machine symbols such as cherries, bells, and horseshoes. There are some neat animations too as symbols flash brightly from the main stage whenever you land a win along the reels.

The music is all about the band in this slot. So if you are a Motörhead fan or enjoy heavy metal then you are going to love playing this game. Don’t worry if you are not a fan of the band or their music as you can configure the music and play the game with just basic sound effects by pressing the “Rock Mode” button to off.


Our Verdict on Motörhead

The game is made by NetEnt and is a fine tribute to one of the greatest Rock and Roll bands ever. It has a decent amount of features and the mystery symbols certainly add a bit of drama as you spin the reels. The Free Spins feature offers the highest payouts but the only downside to it is that you cannot retrigger more Free Spins. The slot is of Low variance so you'll be landing lots of small-sized wins on the reels. Having said that, it is still a highly lucrative slot as if the Wild becomes the mystery symbol in the main game or any of the bonus features then there is the potential to win up to 570X your initial bet!

Enter a moshpit full of cash prizes in Motörhead!