Sherlock of London from Rabcat Gambling: Slot Review - so fun, it's almost criminal!

Join the world's greatest detective as he hunts down bad guys on the streets of Victorian London in this superb Rabcat Gambling slot!
casino game review microgaming rabcat gambling sherlock of london slots

Night has fallen over London in the 20th century and evil has awakened. The cities’ most feared criminals are teaming up together to go on a massive raid the likes of which has never been seen before. The police knowing that they are facing a losing battle turn to the mastermind of criminal investigation – Sherlock Holmes and his trusted companion Dr. Watson to help stop the bad guys from running amok all over London. Let’s join the world’s greatest detective and see if he will lead us to a fortune on the reels in this new release from Rabcat Gambling in partnership with Microgaming.

Sherlock of London is a 5 reel slot with 25 paylines that comes with Connecting Wilds, Double Wins, Bonus Spins, and Free Spins. 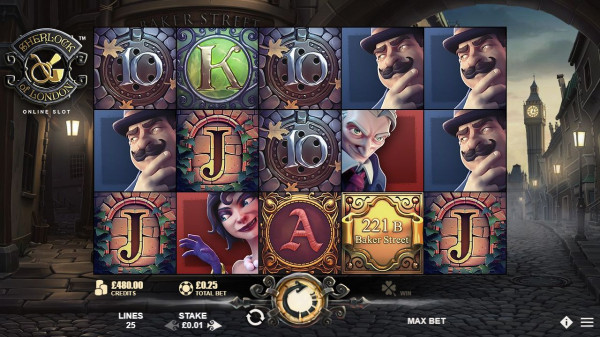 Top Casinos for Sherlock of London

Sherlock of London features a range of symbols all closely connected to the world of Sherlock Holmes including the dastardly villain Moriarty, the cunning Irene Adler, Inspector Lestrade, Dr. Watson, as well as a street sign image of 221B Baker Street. Keep a very close eye on the latter as it is one of the most valuable symbols in the game. Land 5 of these symbols on an active payline and you’ll be treated to fabulous cash payout worth 40X your wager!

The Wild symbol in the game is naturally represented by an image of Sherlock Holmes and substitutes for all other symbols apart from the Scatter to help create winning combinations. It also pays out a hefty 40X your wager for matching 5 on an active payline and is key to activating the following bonus features:

The final feature to discuss is the Free Spins bonus game. To trigger it, you will need to land 3 or more Scatter symbols on the same spin. The Scatter symbol is depicted by an image of Holmes and Watson. Once in this feature, you will receive 10 Free Spins and whenever a Wild lands here then it will proceed to expand to fill the entire reel. The Connecting Wilds and Double Win features can also be triggered here too along with the Dr. Watson symbol now acting as an Extra Wild symbol. Pleasingly, you can retrigger this fun and highly lucrative feature by landing 3 or more Scatters to get your hands on an additional 10 Free Spins.

More Bonuses for Sherlock of London

Sherlock of London features beautifully crafted cartoon-like visuals as the action takes place on the misty covered streets of Victorian London as Holmes and Watson go about apprehending criminals and solving crimes. Symbols in the game are wonderfully designed and consist of Holmes. Watson, Moriarty, Irene Adler, Inspector Lestrade, as well as classic A – 10 playing card icons. Animations in the game are visually stunning as symbols burst into life when part of a win on the reels. For example, when Holmes is part of a win then you will be treated to a sequence of him looking closely at you with a magnifying glass! The Connecting Wilds feature also triggers a cool animation effect as the Wilds quickly form a green path when joining up together on the reels.

The music features an atmospheric and melodic piano-based soundtrack. It ties in nicely with the fast-paced gameplay.


Our Verdict on Sherlock of London

Leading software provider RabCat Gambling in association with Microgaming produced this slot and it is a wonderful tribute to Arthur Conan Doyle’s most famous creation. Sherlock of London features outstanding graphics and animations, a matching soundtrack, along with a nice set of bonus features to keep you spinning those reels again and again. Keep a very close eye on the Wild symbol while playing as it is key to unlocking bonus features such as the highly lucrative Double Wins and Connecting Wilds features. The standout attraction of this game is Free Spins as it is here where you can not only benefit from up to 20 Free Spins but also Expanding Wilds as well as Dr. Watson helping out as an Extra Wild to really boost your chances of landing a windfall on the reels. The top prize for this game is a very good 2,000X your bet which can be won on each spin. Variance-wise, it is Medium so you’ll find that wins occur more often the more you play. For similar online slots also featuring Sherlock Holmes, check out Holmes and the Stolen Stones and Sherlock – Murdered To Death.

Solving crimes has never been so rewarding when you play Sherlock of London!