Smash the Pig! from IGT: Slot Review - a piggy bank made to be broken!

If you want to win big then you must smash some pigs with a big mallet in this highly entertaining slot.
casino game review igt slots smash the pig

Remember when you would visit the carnival as a kid and get to play the ever popular Whack-A-Mole game? Well, software developer IGT decided to borrow elements of this game and replace the poor moles with a bunch of super cute pigs! The smashing action takes place on a quaint little farmyard as the pigs anxiously await your arrival. So have your mallet at the ready and see how many pigs you can hit in this game!

Smash the Pig! is a 5 reel slot game with 20 paylines that includes a Pick a Pig Bonus Game and a Pig Smashing Bonus feature. 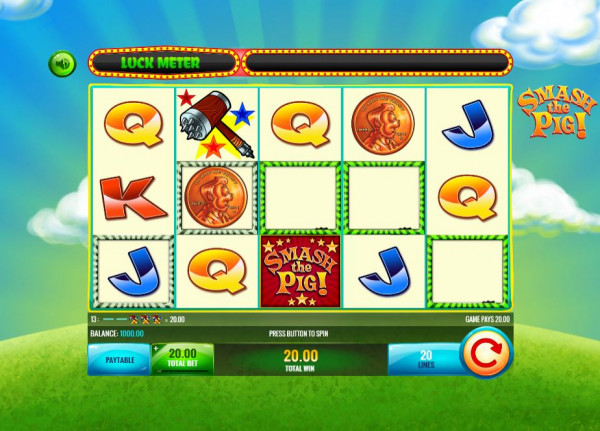 Top Casinos for Smash the Pig!

The first thing you will notice about this game is that it does not feature a Wild symbol. This is quite rare for some online slots but the game does contain 2 symbols that trigger the bonus features of the game. Smash the Pig! benefits from win both ways technology and this essentially means that payouts can occur left to right as well as right to left. Winning combinations must begin on the 1st or 5th reel and all symbols must be adjacent except for the Bonus symbols.

The first Bonus feature is the Pick A Pig Bonus game. To trigger this feature, you need to land 3 or more Piggy Bank Scatter symbols in any position on the reels. This fun mini-game involves picking from a bunch of pigs in order to reveal a cash prize. The prizes are as follows:

The second Bonus feature is the Pig Smashing Bonus Game. This can be triggered through the Pick A Bonus feature or by landing 3 or more of the 3 Pigs Bonus symbols anywhere on the reels. You will notice a Luck Meter that is placed to the right-hand side of the reels and as you collect these Bonus symbols, the meter will fill up with some luck. This excellent bonus game is all about smashing some pigs just like the game title suggests! In this feature, you get to smash 1 of 8 pigs to reveal a cash prize that can be as high as 20X your wager. When a pig is smashed, the Luck Meter will drain a bit, which lets you keep on smashing the pigs until the meter is empty. Manage to smash 5 pigs and still have some luck in the meter then the 3 remaining pigs will scarper off and be replaced by 8 new pigs, giving you the opportunity to smash even more pigs and land some nice payouts in the process.

More Bonuses for Smash the Pig!

The graphics are visually stunning as the game is set in a wonderfully detailed cartoon-like farmyard that is full of bright colours and lots of cute little pigs. Symbols are comprised of Pigs, a Spiky Mallet, a wad of cash, a bronze coin, and the standard A – J icons. I have to admit I did smile when I noticed that the bronze coin resembles a famous US President but in pig form! The animations are a highlight as when you land win on the reels, the winning symbols will crumble into pieces which ties in nicely with the smashing theme of the game.

The music is light techno and whenever a pig symbol appears on screen, you will hear a familiar “oink” sound! It suits the cheerful tone of the game really well.


Our Verdict on Smash the Pig!

This game is produced by legendary software developer IGT and it is a delightful little slot to play. The presentation of the game is top-notch and the cartoon-like graphics, as well as the unique theme, should reel in plenty of players to give this slot a few spins or two. It is a bit strange that the slot does not feature any Free Spins or Wild symbols but the two Bonus features alone more than make up for it. I found this slot to be of Medium variance so it might take you some time before you land a decent enough win but the payouts can be quite lucrative especially when you trigger the Pig Smashing feature.

Smash the piggy bank to smithereens for a massive payout in Smash the Pig!