This GamingRevolution review has looked into why Thunderstruck is so popular among casino players. The slot game combines great graphics with exceptional odds, thanks to free spins and multipliers.
casino game review microgaming slot machine slots thunderstruck thunderstruck II

Thunderstruck is a slot game developed by Microgaming, which stars Norse warrior Thor. A mythology-themed slot game is little unconventional, as are the five reels and nine paylines. However, the game's design straight away strikes players are exceptional. 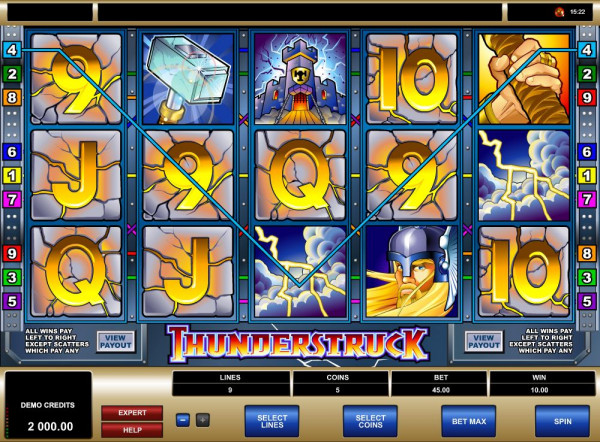 As you probably already gathered from considering the above, some serious thought went into the development process of Thunderstruck by Microgaming. One of the best features in Thunderstruck is the Thor symbol, which acts as a wild symbol. This symbol can substitute any symbols and complete a winning combination. This symbol turns up fairly regularly and is pretty special due to it being worth 10, 000 coins if it turns up 5 times. Further profitable symbols are the ‘ice hammers’ or the ‘staffs’. Five of either of them gives players 750 coins, if the combination includes a ‘Thor’ symbol, then this amount is doubled to 1,500 coins.

With so many bonus features, anticipation is kept at a high. The only downside of that is that hope never fades and players have to be careful not to drain their casino funds.

The big and bold graphics help players concentrate on the game, the background is adjustable and a great feature ‘Quick Spins’ complements the usual options, ‘Autoplay’ and ‘Max bet’. Quick spin is a mode which ensures that the winnings are shown quicker and players continue to the next spin without wasting time, patiently waiting on his results to be revealed. This feature of Thunderstruck should become standard in all slot games. It sure would make gameplay much more enjoyable.

Did I mention that a free spins bonus is also available in Thunderstruck? If I am so lucky and receive free spins, during which the winnings are trebled, or even multiplied six-fold, I set aside a little of my winnings and keep going. This Microgaming game simply is a hell lot of fun, and with a minimum coin amount of 0.01 is ideal for players, who want to only then risk more if they are already on a winning streak.

Our Verdict on Thunderstruck

Thunderstruck is yet another great production by Microgamimg. The theme, given the wealth of games based on Nordic mythology, could be a little more exciting. However, the design, which prominently displays the pay table, makes up for this. All in all, there is a reason why players love Thunderstruck. It is somewhat simple but can be rather profitable.