Ace Ventura Pet Detective from Playtech: Slot Review - "well, Lois, I'm not quite ready for a relationship yet..."

It is a five-reel, 243 'all ways pays' online slot from Playtech. The movie was stuffed full of memorable taglines and catchphrases. You can relive them all here on Ace Ventura Pet Detective, the slots game.

Ace Ventura Pet Detective from Playtech uses the original movie (there was a single sequel in 1995) as its theme. The symbols used are the playing card values jack to ace, plus several scenes of Ace behaving in the over-the-top manner that made Carrey famous. All possible bet lines - all 243 of them - are in play at all times, and whatever you select as your coin value is multiplied as your wager upon each spin. 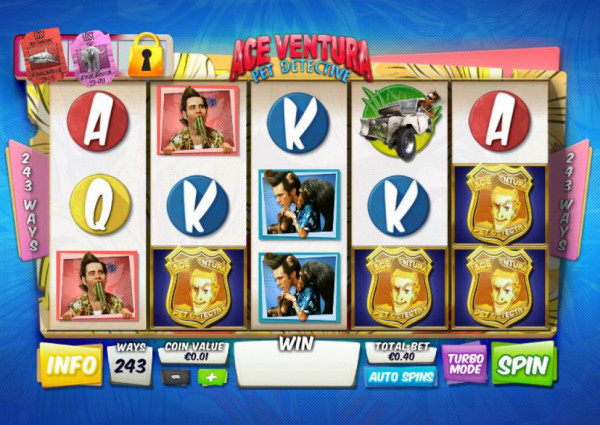 In this slot there are three bonus features that are triggered randomly during normal play:

Jungle Friends: Ace summons his jungle friends to give you extra wilds

Sneaky Walk: Ace sneaks across the reels to add stacks of wilds

Loser: Ace respins a losing spin, increasing a multiplier until you win

“Alllllllllrighty then!!” - this is probably one of our favourite phrases from the movie, and it can be heard after most payline wins. The symbols are all characters (animals included!!) from the hit movie and the soundtrack is from the original film too.

A pic of Ace holding a business card which states 'Ace Ventura Wild' is the wild symbol in this game. It substitutes for all other symbols aside from the scatter symbols and the animal modifier symbols.

The 'backside of a rhino' bonus symbol acts as the scatter symbol. If you land this symbol on reels one, three and five during your game, you are awarded seven free games with animal modifier bonuses.

During normal play you may also find the special 'key' symbol. If you do manage to land a key, you unlock an extra 'animal modifier' so that you enter free spins with three modifiers as opposed to the usual two.

No matter what you may think of Carrey's movies, Ace Ventura Pet Detective is a mighty fine game from Playtech. The graphics and animations are perhaps not the best, but the gameplay is truly excellent with some decent, inventive features.

Why not take it out for a spin and see if it can help you to detect some tasty jackpot payouts?