Age of the Gods from Playtech: Slot Review - time for a trip back through Greek mythology

Inspired by Greek mythology, can you defeat the ancient Gods of Greece and claim all of its treasure?
age of the gods casino game review playtech slot machine slots

This game is based on the Gods of ancient Greek mythology.

There is a whole slew of Greek references here such as laurel wreaths and characters ranging from Hercules all the way up to the head honcho Zeus himself! Get ready to land on Mount Olympus and face off with the gods!

It is a 5 reel slot game that comes with 20 paylines and a whole host of cool features that will have you coming back again and again. 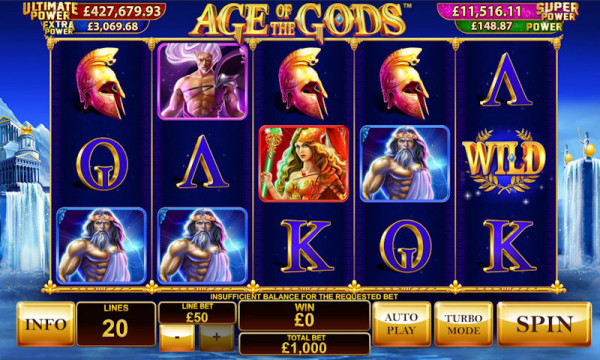 Top Casinos for Age of the Gods

More Top Casinos for Age of the Gods

The wild symbol in this game is denoted by a laurel wreath and as standard it substitutes for all symbols except the scatter symbol but it is also the most rewarding as it offers 10,000 back on your line bet for 5 on a given payline. Thank the gods themselves for this reward!

If you manage to land all 5 God symbols in any order on an active payline then you will activate the Special Pantheon of Power feature. This awards you with 200X your line bet!

There is also the Age of Gods Free Spin Bonus feature. If you get three Age of Gods symbols anywhere across your reels then you will trigger this feature. It is an interesting feature as you get to pick from 20 coins and the object of this game is to land as many multipliers and free spins as possible all the while avoiding Hades.

The last feature of this game is the Age of Gods Jackpot. It is random when it shows up on the reels and it is played like a mini-game where you pick from 20 coins until you find 3 matching coins. These coins will then trigger any of the four progressive jackpots. The nice thing about this feature is that it guarantees you a win in at least one of the jackpots.

Best Welcome Bonus for Age of the Gods

More Bonuses for Age of the Gods

The graphics are beautiful and the colours used are very vibrant. The gods themselves have a rather other-worldly appearance and strike as imposing figures when they display across the reels. It is an interesting visual take on Greek mythology but a feast for the eyes nonetheless!

The music is very dramatic and really adds to the epic feel that this game creates.

The game has 5 reels, 20 paylines, a respectable RTP of 95.02%, and the opportunity to win from up to 4 progressive jackpots.


Our Verdict on Age of the Gods

Age of the Gods is made by Playtech and it looks fantastic. There are many Greek Gods themed games out there right now but this game stands head and shoulders above the competition due to its sleek presentation, great bonus features and opportunities to win some serious dosh.

Do battle with the Gods of Olympus and see if you can claim all their treasure!