This game is based on ancient Gods of Greek Mythology and is a part of the Age of the Gods series by Playtech but what sets this one apart from other Greek Gods themed games is that it centres on the lesser known Gods.

To be honest, I do not know that much about the Gods in this game so it was interesting to learn about them and to brush up on Greek Gods along the way!

It is a 5 reel slot game that has 20 paylines and a whole host of nice features that will keep you spinning those reels for quite some time! 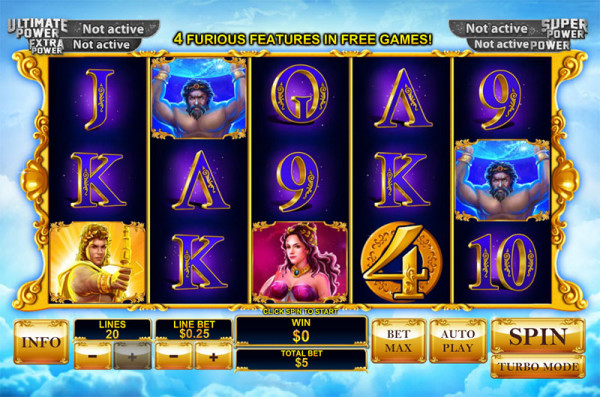 Top Casinos for Age of the Gods: Furious Four

More Top Casinos for Age of the Gods: Furious Four

The first cool feature that I came across while playing this game was the wild symbol. It is depicted by the number 4 and as standard it substitutes for all symbols except the scatter symbol. The amazing thing about the wild symbol is that if you land 5 matching Wild symbols on a given payline then you will be awarded with 10000 times your line bet! This is the highest award in the game so definitely thank the gods for this bounty if you receive it!

The lesser known gods in this game are Apollo, Atlas, Hephaestus and Pandora, being gods after all, they do give out the highest values but they also trigger some cool special features.

The coolest feature of this game is the Free Spins mode as it contains 4 furious features – Age of Light, Age of Curiosity, Age of Fire and Age of Endurance. This mode is triggered when you get 3 more scatter symbols across the reels. You will then be awarded with 12 free spins and the 4 furious features will become available. Each furious feature is linked to a specific God, for example Age of Light is connected to Apollo and it will turn Apollo into a stacked Wild and substitute for all symbols except wild and scatter. Age of Endurance is linked to Atlas and is triggered when Atlas covers the third reel and gives you 3 Age of Endurance free spins, the Atlas symbols will substitute for all symbols except wild and scatter and freezes the reels for all remaining Age of Endurance free spins.

The last feature that I encountered while playing was the jackpot bonus game. This occurs randomly and can even trigger when there are no game wins on the reels. It is a 5x4 grid with 20 coins and gives you the opportunity of winning one of four jackpots, you choose coins to reveal symbols and if you match 3 symbols then you will win that jackpot.

Best Welcome Bonus for Age of the Gods: Furious Four

More Bonuses for Age of the Gods: Furious Four

The graphics are brightly coloured and aesthetically pleasing on the eye. The borders of the reels are covered with bright gold and the background is cloudy and almost dream-like.
The gods themselves look quite foreboding as reel symbols and they certainly grab your attention when the reels are moving.

The music is slow but this is intentional as it picks up the pace the more you play. It really does compliment the atmosphere of the game and adds to the excitement of it all.


Our Verdict on Age of the Gods: Furious Four

Age of the Gods: Furious Four is made by Playtech and it’s an excellent addition to the Age of the Gods series. I really enjoyed how it put the lesser-known gods front and centre in this game. With nice graphics, many neat features and the chance to win one of 4 progressive jackpots, it is definitely worth checking out.

Do you have what it takes to defeat the Furious 4?