Birds on a Wire from Thunderkick: Slot Review - watch where you step

Birds on a Wire is a 5-reel video slot by Thunderkick. This GamingRevolution review found its graphics to be outstanding and the slot game's free spins and multiplier features profitable.
birds on a wire casino game review slot machine slots thunderkick

Thunderkick’s Birds on a Wire really is something. Starting the game, players will be greeted by a video slot, which is super colourful. The cartoonish animations are truly great and immediately heighten a player's mood. The game features 5 reels and 17 paylines. 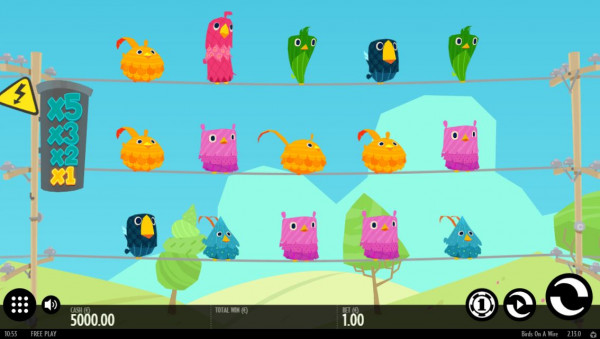 Top Casinos for Birds on a Wire

More Top Casinos for Birds on a Wire

One of the best features in slot game Birds on Wire is that after each winning ‘spin’ the birds in the winning line are electrocuted and disappear. They are then replaced by the symbol directly above. With every time that the ‘dropped’ symbols form a winning combination, a multiplier will be applied and increased up to five-fold the amount.

This multiplier creeps up in free spins rounds. First things first, up to 34 free spins are up for grabs. The feature is triggered by getting at least three or more bonus symbols (fittingly, a cat in a cardboard box, which scares off the birds). So far, so standard. It gets, however, quite exciting if the ‘dropping symbol’ mode is triggered in these rounds. Then, the multiplier may reach 20.

What's even better? Thunderkick's Birds on Wire uses the Inwinity Spin. This means that if the last of the free spins does not result in winnings, the reels will spin until it finds one.

Best Welcome Bonus for Birds on a Wire

More Bonuses for Birds on a Wire

Rather than the design forming a classic row, the row in this game is represented by a wire, with the symbols – the birds – sitting on these. If you had any doubt about the game’s name, there you are! Once you press the spin button, the little birdies fly away, and new ones come. The background in this slot game, trees and fields, add to the great countryside atmosphere this game creates.

The odds of having fairly solid wins in this slot game aren't bad at all. For that reason, playing Birds on Wire is mostly a pleasure. Just don't get carried away and only ever risk as much as you can afford!

Our Verdict on Birds on a Wire

I love the graphics. This online slot is really well designed and it's less conventional than other games. The electrocution of the birds was a really good idea by the development team and continues to put a smile on players' faces. Birds on a Wire is a fabulous example of software companies pushing each other to create games that are even more exciting than before.