Fruit Warp from Thunderkick: Slot Review - some great payouts from this trendsetting game

Thunderkick is among the younger slot makers on the market. With slot machine Fruit Warp, the software provider has created a ground-breaking online game, which comes with some good-sized payouts and outstanding game design.
casino game review fruit warp slot machine slots thunderkick

Slot game Fruit Warp looks what you would expect it to look like. There is loads of fruit, and given that it has been developed by Thunderkick – the small innovative software house from Sweden – this fruit has been wrapped into the ingenious design. The graphics are, as one has come to expect from Thunderkick, 3-D. Just like in Sunny Scoops, another slot game by the game's maker, there are no paylines per se. 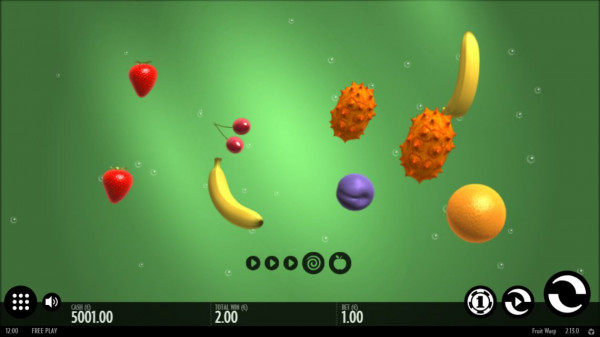 Fruit Warp comes with a theoretical return of 97%. Now, that fairly good potential payout is partially down to the most profitable symbol, the dragon fruit. This fruit symbol can award players up to 216-times a player’s stake.

The way the system works in Fruit Warp, players have to hold out for combinations of at least three. If there is a combination of four, a pretty decent little feature is triggered. The symbols that did not trigger the win vanishes and a player receives a re-spin. With a little luck, better symbols and more wins occur. If a player receives five of a kind, he is redirected to the fruit mode.

In this online game, a player has to collect as many of the same fruit as possible and fill what’s known as the Warp Meter. Dynamic multipliers may result, and re-spins may be triggered.

In sum, the features in Fruit Warp are so different to the features in most slot games, which – even if this game isn’t your cup of tea – makes it a novel change from the usual slot machines.

Prior to the game starting, an intro video plays. It’s worthwhile not to skip the video. If it serves a purpose, besides entertaining players, the video certainly proves to players that no short-cuts were taken and that a lot of work went into creating Fruit Warp.

Once a player hits the minimalist spin button, fruit comes flying through the air. From bananas to exotic dragon fruit, the graphics are of an unbelievable quality. The colours are bright and stylish and the 3-D images, which turn as the game waits on you taking another spin, almost make you believe this is real fruit. Well, or at the least, a very realistic piece of fruit, which could certainly rival some modern Disney productions.

As mentioned, the menu is minimalistic. This, however, does not mean that fewer options, than in some other slot games, are included. Before playing the slot machine, it is advisable to familiarise yourself with the menu. Clicking on the Bet button will show 15 bet levels. If you click the button to the very left, further settings are opened. If you choose Toggle Shortcut, you can arrange – add or replace – any existing shortcut on the menu. This is a great feature to have, given that many players may prefer to have the game rules readily available and the autospin option hidden.

Our Verdict on Fruit Warp

Fruit Warp by Thunderkick is a great title. The graphics are worth a look alone, and the game's novel payout system makes it super interesting. Especially, for those, who are bored by conventional slot games, or lovers of fruit-themed slots. Thunderkick has managed to gain an impressive reputation in the iGaming business. This is not due to the quantity, but due to the quality of these. Fruit Warp is another shining example of this.