Fa-Fa Twins from Betsoft Gaming: Slot Review - a fortune made for two!

Oriental-based slots have been a staple of the online slots industry as they remain some of the most popular games today that players keep coming back to again and again. Fa-Fa Twins is one of these games in question as it focuses on an adorable pair of twins who hail from the beautiful country of Japan. So get ready to board a plane and take a trip to the land of the rising sun and see if these cute twins will help land you a nice wee fortune!

Fa-Fa Twins is a 5 reel slot with 243 ways to win and it features Dual Reels and a Double Up game. 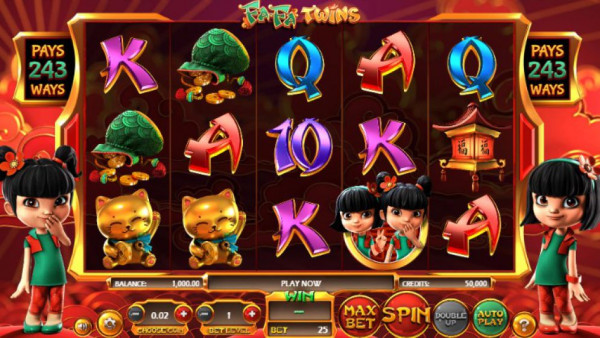 The first feature to highlight is that the game has a whopping 243 ways to win! This provides players with plenty of opportunities to land some big wins on the reels. That is not all as the game also contains a very cool Dual Reels feature, which occurs when you spin the reels and you’ll notice that at least two adjacent reels will be identical. The reel duplication can even spread to a 3rd, 4th, or even a 5th reel if you are really lucky!

The Wild symbol is denoted by the game logo and it substitutes for all other symbols to help form winning combinations on the reels. The only downside of this symbol is that it will only appear on reels 2, 3, 4, and 5. As you spin the reels, keep an eye out on the Fa-Fa Twins symbol as it is the highest paying symbol in the game. Land 5 of these symbols along the reels and you’ll be treated to a fantastic 1,000X payout!

The last feature to highlight is the optional Double Up game. This is triggered whenever you form a win on the reels and gives players the chance to increase their winnings. To play this game, all you have to do is click on the “Double Up” button when it lights up after you have landed a win. In this risky but fun game, you have to choose between heads or tails as a golden coin is tossed. Choose correctly and your winnings will be doubled. If you are feeling really lucky then you can decide to risk 100% of your winnings on the flip of a coin but just know that if you guess incorrectly then you will lose all of your winnings and be taken back to the main game. However, if you feel the risk is too much, you can always just collect your current winnings by clicking the “Collect” button and be taken back to the main game with your winnings intact.

The graphics are beautifully rendered on-screen as the Fa-Fa twins stand on opposite sides of the reels with a wonderful orange and red glow shining in the background. When you load up the game, you will be treated to a nice little introductory video of the twins in action as they acrobatically jump and flip over each other to start the game, it is a really nice touch. Symbols are a nice wink and nod to Japanese culture and comprise of a Lucky Cat, a Green Purse, a Lotus Flower, a Red Lantern, and even a Golden Koi! The animations are a nice visual treat especially when you land a win on the reels as symbols sparkle like mini-fireworks.

The music is poppy and upbeat but also creates a relaxing atmosphere the more you play. It ties in really nicely with the Asian theme of the game.


Our Verdict on Fa-Fa Twins

Betsoft Gaming produced this fine slot and it is a very fun game to play and really easy to get into. Admittedly, the game does not contain too many features and it would have been nice to see some Free Spins thrown into the mix but the fact that there are 243 ways to win along with Dual Reels more than makes up for it. The Double Up game is a nice addition but can be quite risky to play, especially when you go all in and gamble 100% of your winnings! I found this game to be of Medium variance so you won’t be waiting too long for a decent enough payout when you start spinning those reels.

Double the fun and double your payout in Fa-Fa Twins!