Get ready to rock those reels in this latest release from stellar software provider Play’n GO! This game is actually one of the first branded titles from the company and is all about legendary Swedish power metal band Sabaton. This extremely popular band are not only famous in their own country but all across Europe as they have over 1 million listeners on Spotify with many of their songs having been streamed hundreds of millions of times already. The band is known for producing melodic songs about war, historical battles, and feats of heroism so it’s easy to see why they appeal to so many people. Without further ado, let’s join the band on centre stage to see if they help can us land a moshing good fortune on the reels? 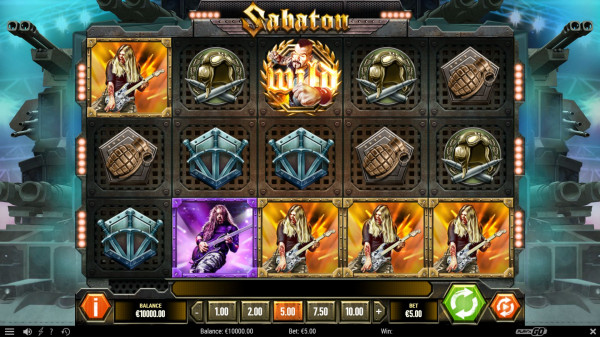 The first feature to highlight is the obligatory Wild symbol which is represented by an image of the lead singer of the band Joakim. Typically like most Wilds, the main job of this symbol is to replace all other symbols apart from the Scatter to help form winning combinations on the reels. It is also the most valuable symbol in the game as if you are lucky enough to land 5 Wilds on active payline then you’ll be leaving the concert with a lucrative cash prize worth 100X your wager!

In Sabaton, you can benefit from a superb range of bonus features. First off, is Metal Stacks and Mystery Symbol which is a random bonus event where one random symbol will appear stacked on each spin. All band members can also display as Mega Symbols during features and can land on all reels to further boost your chances of bagging yourself a big cash payout.

Another bonus feature that can occur randomly on any spin is the Chained Reels feature. Once triggered, between 2 and 3 adjacent reels of reels 2, 3, and 4 will link together to display the same symbols. There is also a Last Stand feature which is named after one of the band’s most famous songs and when this random bonus triggers then between 1 to 2 reels are filled with stacks of Wild symbols to give you Wild Reels.

The star attraction of Sabaton is the Battalion Spins feature. To activate it, you will need to land 9 Scatter symbols or by landing a full Mega Scatter (3x3) symbol on the reels. The Scatter symbol in the game is illustrated by an image of the band logo. In this rewarding feature, you will be given 7 Spins with one symbol chosen at random to become the Metal Stacks and Mystery Symbol for the entire feature. Reels 2, 3, and 4 will also appear linked which include Mega Symbols too and if you land between 3 to 8 Scatters then all of them will be replaced and will then change into your chosen symbol. Pleasingly, Battalion Spins can be retriggered by landing additional Scatters to get 7 Extra Free Spins.

In terms of graphics and presentation, this game is a sheer joy to look at as it takes place on the main stage where the band is playing with a huge military vehicle packing lots of heavy firepower. The background is filled with bright stadium lights and if you look closely you will even notice steam rising up from the bottom of the reels! Symbols are nicely polished and consist of the various band members of Sabaton along with Roman Helmets, Swords, Bullets, and Grenades. The animations are top-notch as symbols move rapidly down the reels and are highlighted by an orange spark of electricity when part of a win on the reels. The Battalion Spins bonus feature is a particular highlight as the stadium lights turn bright orange with explosions everywhere whenever you land wins.

The music features excerpts from some of Sabton’s back catalogue so if you're a fan of the band and heavy metal music then you are going to love this game!

The game features 10 paylines, an excellent RTP of 96.5%, and a maximum payout worth 5,000X your initial wager.


Our Verdict on Sabaton

This slot is made by Play’n GO and for one of their first branded games, they’ve knocked it out of the park here. Sabaton features spectacular graphics, a headbanging soundtrack, along with some fantastic bonus features to keep you in the moshpit for a long time to come! The random bonus events such as Metal Stacks and Last Stand keep the action flowing nicely with the Linked Reels feature providing lots of cash payouts. The most rewarding feature by far is Battalion Spins which can take quite a few spins to trigger but is definitely worth sticking around for as you can benefit greatly from Free Spins featuring the Metal Stacks and Mystery Symbols feature. It is also here where you can win the game’s top prize which is a whopping 5,000X your total bet! Variance-wise, this slot is definitely High so make sure to bring lots of bankroll before attending this concert! For slots with a similar rock ‘n’ roll theme, check out Motörhead and Kiss.

Bring the house down to win a heavy metal fortune on the reels when you play Sabaton!