Sunny Scoops from Thunderkick: Slot Review - you better have some ice-cream nearby...

I picked the game as I loved the theme, surprisingly so, given that its winter. The thought of ice cream in a cone simply appealed to me. 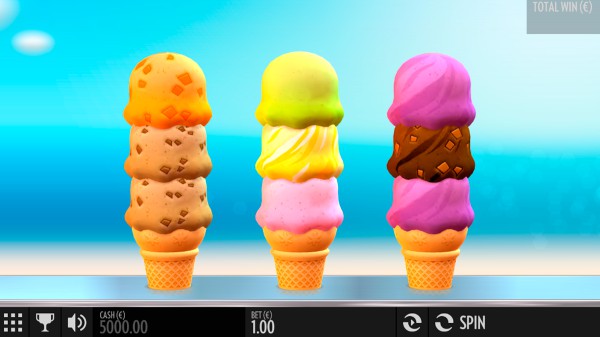 Of course, in true Thunderkick-style, this slot game comes with some pretty special features. One of the best, and most profitable, features is the bonus wheel. This wheel gives you up to seven times your stake. It is activated when three of the same ice cream flavours appear on the very same vertical payline. Then, there is yet another bonus feature, which will give you 10 free spins. What's even better about this free spins bonus is, that whenever a player has a winning spin, an extra bonus spin is awarded to the player.

Sunny Scoops has been developed by Thunderkick, a Swedish company, and different flavoured scoops of ice cream, on a conveyor belt, make up the symbols in this game. This is less than conventional, and a super idea!

Sunny Scoops by Thunderkick is a game, players could play for a very long time. Simply, because it is easy on the eye. The blue background makes it easy for players to focus on the screen for a prolonged time. For that reason, I tend to place small bets. Like that, I can ensure that my funds will not run out in one go. It is also tactical not to risk too much. Instead, with this approach, a player can remain in control of his bets.

Our Verdict on Sunny Scoops

What makes this game stand out is the fact that it is a feast for the eyes. Unfortunately, the winnings at Sunny Scoops are rarely gigantic. Having said that, the sum of all little winnings can certainly add up in this cheery game.