Sushi Bar from BetSoft Gaming: Slot Review - hop up at the counter and get ready for sushi

Sushi Bar by BetSoft Gaming is a slot machine with great graphics and a rather simplistic payout system. The wins are solid and include up to 1,000 coins if a player hits several of the chopstick symbols.
betsoft gaming casino game review slot machine slots sushi bar

Sushi Bar – a slot game developed by BetSoft – comes with 25 paylines and has 5 reels. The game is set, as expected with a name like that, in a Japanese sushi restaurant.
Unsurprising, this BetSoft slot machine loads seamlessly and never lags. While this sounds rather simple, it’s quite important and guarantees fun gameplay. 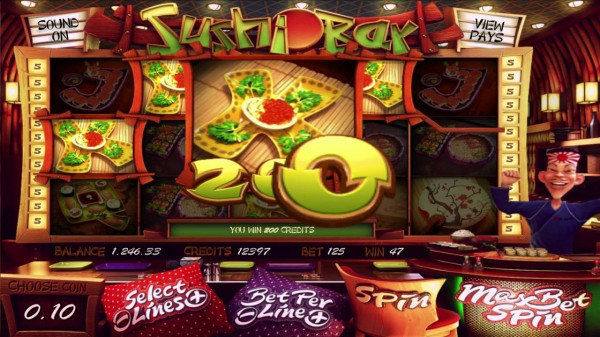 Let’s address some of the features available in Sushi Bar. The symbols include sushi-themed appliances. Some pay pretty decently. For example, the chef’s knives – if a player hits to two, or up to five – gives him winnings of 10 to 500 coins.

The soy sauce substitutes any symbol and doubles winnings – pretty tasty! – while the 'cleared plates' reward players with some extra coins – pretty quirky idea (if only we could always be rewarded for indulging).

This, however, is where the specials stop. Sushi Bar is certainly more about design and simplicity. It is noteworthy, though, that the chopsticks pay highest with a staggering 1000 coins available.

Bearing all this in mind, my favourite feature in Sushi Bar is the implementation of the theme. The sound effects are super pleasant and it’s a fun game if you are into cool cartoon characters and delicious-looking food. Beware, though. This slot machine may make you hungry.

The theme has been implemented pretty realistically, with Japanese music playing in the background and delicious sushi platters making the rounds as symbols. The buttons – to select lines, bets or max bet – are displayed on the back cushions of chairs, facing the sushi bar. The coin amount shows on a menu board. In the foreground, a sushi chef is tinkering away. So far, full marks on design idea and implementation.

In line with its general simplicity, BetSoft created a payout system that is fair and uncomplicated. The payouts are pretty decent, yet rarely gigantic, and come frequently. This makes Sushi Bar one of those slot machines that are a great enjoyment to play. High rollers may be less interested in the game, than players who simply want to experience the thrill of playing slot games online.

Bearing all this in mind, the online game is even fun to play without money - in fun mode - as well as with lower stakes. Alternatively, players can hit auto-spin and after a while, wins will likely accumulate. Given how aesthetically-pleasing this slot machine is, the auto spin option really is something for players that simply want to marvel at the graphics.

Our Verdict on Sushi Bar