If you haven't checked out this new game from Thunderkick then you need to go and do that now!
casino game review slot machine slots thunderkick turning totems

The slot is based on a Native American theme, setting you in a desert, with rocks and cactus surrounding the reels. The game offers you a visually satisfying experience!

Turning Totems is a 5 reels and 11 paylines slot available to play on desktop and most mobile devices. The reels are made by 5 totem poles each showing three faces masks. 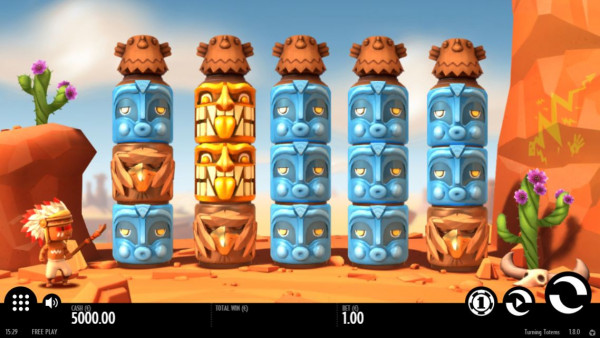 The bonus feature round starts with the native American boy running up a hill to a new set of totem poles. These poles have a series of multipliers in front.

The weather also changes at this point – gone is the sunny day, and rain pelts down as lightning fills the sky - which really helps to change the atmosphere of the game at this point!

This feature starts off with 12 spins, but every time you land the bonus symbol you gain an additional 2 (up to a maximum of 30). During this round every re-spin means that the multiplier is increased, moving from 1x, through 2x, 3x to the maximum 5x, making for some potentially huge wins.

As an added bonus the round ends with a ‘winfinity’ spin – where the feature will continue until you gain a win - nice!!!!!

Turning Totems starts with an animated clip which sweeps you through the clouds to reveal a North American desert scene, complete with large rock formations and settlements featuring wigwams and roaming animals. The camera zooms in on a large rock formation, where five large totem poles stand, a young Native American boy standing to the left - this forming the setting for the slot, the totem poles acting as the reels.

This slot has a very nice look to it, the five totem poles have a very colourful air, with a mixture of both friendly and fierce looking engravings on the poles. The top of each pole sees a monkey like character sitting serenely as birds fly overhead. Each spin sees the poles rotate to reveal another set of symbols, the animation met by the sound of the wind which causes the poles to turn, all the while crickets chirping in the background. When landing a win the sound builds up nicely as the promise of bigger and better wins beckon.

This slot is very different to what you might expect from a slot with five ‘reels’. Here the symbols appear randomly across the poles and you can land more than one symbol at any one pole at a time. To win you’ll need to land at least six of the same symbol anywhere across the poles (much like a scatter symbol). Landing six will give you the minimum win amount, however, you could in theory land the same symbol 15 times and this is where the largest payouts happen. With no win lines as such, you’ll simply have a total stake for the spin, which you can choose.

The orange and fierce looking symbol wins you 254x and the red one that looks a little ‘angry birds’ wins you 72x. The green and blue symbols make up the winning symbols. There are however also four ‘no win’ symbols, each of these brown with a basic pattern and any number of these won’t gain you a win.

You might be forgiven for thinking that landing all 15 of the same symbol might be impossible, but you have an advantage here. When the same symbol appears five or more times across the poles, these will be held in place and the other symbols will be replaced. Every time you land more of the ‘winning symbol’ the re-spins will continue until you have a spin where no new ‘winning symbols’ appear. For example, should you land 6 of the pink symbols on the initial spin, these six will stay in place, and the other nine symbols will now be replaced. Landing another pink symbol on this spin, will see the remaining eight symbols replaced and this will continue on until you receive no ‘new’ pink symbols.

Our Verdict on Turning Totems

Thunderkick is known for producing slots with some very original and quirky features and they have done it again here with Turning Totems. This game is unique in many ways, being very different to a traditional slot. The game is even better due to the colourful and lively graphics and the animations – especially leading up to and after the feature round. This slot really is one of the most impressive out there, and you may get hours of enjoyment from it like we did!!