There are hardly any football (or soccer as some folk call it) related slots that are currently out there right now so I was pleased to see that leading software provider Push Gaming noticed this gap in the market and released this cracking online slot. Football is the most popular sport in the world and played by millions of people all across the globe so it really was about time that someone stepped up to the plate or penalty spot and release a game that revolves around it. With the advent of the World Cup kicking off in Russia this year then there is no better time to play the beautiful game right now. Join us as we tie our laces and take to the pitch and see how many goals (including own-goals) we will score in this game! 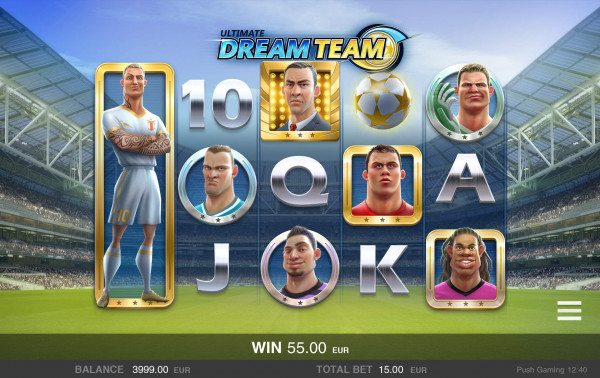 The first feature to highlight is the Wild symbol and it is represented by a football with gold stars that looks strikingly similar to an Adidas Champions League ball. This symbol substitutes for all other symbols apart from the Scatter and Bonus symbols to help form winning combinations. This symbol is also the most valuable symbol in the game as if you land 5 of these symbols on an active payline then you will be celebrating like a Champions League winner with a payout worth 800X your stake!

As you play the game, keep your eyes peeled for the footballer symbol that bears an uncanny resemblance to Cristiano Ronaldo albeit with blonde hair as this symbol also pays out 800X if you manage to land 5 on an active payline. This highly lucrative symbol also comes stacked on the reels.

The Scatter symbol is illustrated by a football shirt in a gold frame and only appears on reels 1, 3, and 5 in the game. If you manage to land 3 or more of these symbols on the reels then you will trigger the Free Spins feature. In this feature, you will be awarded 5 Free Spins and each time the Scatter symbol lands then it will reveal a Wild Multiplier Ball symbol which is similar to the Wild football symbol but with blue stars instead of gold ones. This Wild symbol only appears in Free Spins and comes with a nice 2X or 3X multiplier value attached to it. Another pleasing aspect of Free Spins is that if you land 3 more Scatter symbols while in this feature then you’ll be awarded an additional 5 Free Spins.

The Bonus symbol is denoted by an image of a football manager and only appears on reels 2, 3, and 4 in the game. Land 3 of these symbols on the reels to activate the excellent Dream Team Feature. Similar to picking Fantasy Football teams, this excellent bonus game takes place on a football pitch and invites players to pick shirts to fill up the 12 unfilled positions consisting of a manager and 11 footballers. One of the 12 positions is marked as the Star Man. When this position is filled then the pick win value is nicely multiplied by 3 and picks can also receive a ‘Boost’ which increases all of the prize values. Try to avoid picking the Yellow Card at all costs as if you find two cards then the feature will end. Manage to successfully fill in all positions and you will receive a nice 10X multiplier as a reward.

The game features a slick presentation full of highly polished graphics. The backdrop of the slot is a gigantic football stadium filled with fans with the reels sitting just above a freshly cut football pitch. Symbols are superbly designed and feature a range of footballers that look incredibly similar to Wayne Rooney, Cristiano Ronaldo, Manuel Neuer, Ronaldinho, and Bastian Schweinsteiger. The animations are neat as symbols zip up and down the reels in rapid fashion and light up nicely when part of a winning combination on the reels.

The music is light techno and features lots of fans chanting in the background. It complements the football theme of the game perfectly.

The game has 25 paylines, a brilliant RTP of 96.76%, and a decent maximum payout worth 800X your initial wager.


Our Verdict on Ultimate Dream Team

Ultimate Dream Team is made by Push Gaming and is an excellent adaptation of the beautiful game. It’s wonderfully designed, really easy to play, and contains a great range of features to keep you spinning those reels for countless hours. I really liked how the symbols resemble famous real-life footballers but non-football fans will love this slot too as it has the obligatory Free Spins bonus game but also an excellent Dream Team feature. Speaking of the Dream Team bonus game, this can award some huge payouts especially if you manage to pick the Star Man and fill out the whole team. I found this slot to be of Medium variance with payouts occurring on a regular basis the more you play. For slots with a similar sports theme, check out Rocky and Frankie Dettori’s Magic Seven.