Rocky from Playtech: Slot Review - can you pack a punch? Adriannnn!!!....

The Rocky slot game from Playtech is based on the popular movie franchise, which stars Sylvester Stallone as the boxer Rocky Balboa. It features several characters from the movies as symbols. These include Balboa himself, his wife Adrian, and some of the opponents he faced in the ring: Apollo Creed, Clubber Lang, and Ivan Drago. The letters in the word Rocky are also used as symbols.
casino game review playtech rocky slot machine slots

This is a 25 payline slot using 5 reels. There are two bonus rounds, and a gamble feature where you can try and double up your winnings after a successful spin. There’s also a special feature that can win you five times your total bet. 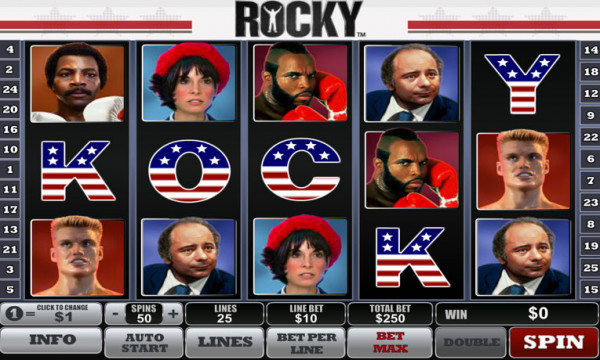 Rocky features a total of four special symbols: an image of Balboa, the “Italian Stallion” logo, a white boxing glove, and a red boxing glove. The image of Rocky is the wild symbol and this can substitute for any symbol, apart from the other special symbols, to form a winning combination.

The “Italian Stallion” logo is the scatter symbol. If it appears three or more times anywhere in view it awards free spins.

The knockout bonus round is triggered when the boxing gloves appear on reels 1 and 5 at the same time. To start with, you have to select an opponent for Rocky to fight, choosing from Creed, Lang, and Drago. Rocky then fights a ten round match against the chosen opponent, with the game using video footage from the movies.
You are awarded a cash prize for each round that Rocky wins. If he lands a knockout in any of the rounds, then you automatically win a prize for each of the remaining rounds.

This feature awards an instant prize of five times your total bet. It’s triggered if the letters used as symbols in the game spell out Rocky from left to right on any active payline. The wild symbol cannot be used for the purposes of this feature.

With this feature, you can choose to gamble your payouts from winning spins. You just have to click the “Gamble” button following a winning spin and then you have to guess whether the next card will be red or black. If you guess correctly your payout is doubled, but you lose it all if you guess wrong.

Not only is this game based on these famous movies, but Playtech’s Rocky also features video clips from the original motion picture. Casino fans who have watched the films would definitely enjoy spinning the reels of the slot version.

Rocky is a video slot with nice graphics, superb animations and clear audio. I am a huge fan of the movies myself. I really enjoyed the character symbols, especially Clubber Lang and Ivan Drago.

There are several ways to adjust how much you stake per spin on this slot game. You can play with any number of paylines from 1 to 25, and can bet up to 10 coins per spin. You can also choose the value of the coins you are playing with. The available values vary from one online casino to another.

Rocky doesn’t have a progressive jackpot unfortunately, but it does have a generous fixed jackpot. If you spin five of the wild symbols on an active payline, then you can win 10,000 times your line bet. It’s a knockout!!!

Our Verdict on Rocky

The video slot Rocky from the software provider Playtech can be a pretty fun online game to play, particularly for the fans of the movie. They can see video clips from the movie as well as get the chance to see Balboa fighting against his opponents which are very thrilling and exciting to watch. The game also has generous bonus features which can greatly boost the bankrolls of players.

Overall, Rocky is an entertaining online slots game that offers good graphics and a large fixed jackpot to lucky punters.