Under the Bed from BetSoft Gaming: Slot Review - face those fears!

GamingRevolution has tested Under the Bed by BetSoft Gaming, a great slot machine with a superb bonus game. The bonus game in this slot machine is a pick game, which allows players to choose their winning or losing card.
betsoft gaming casino game review slot machine slots under the bed

The idea behind Under the Bed, a game by software provider BetSoft, is really quirky. All kids are scared of what’s below their beds, and BetSoft made this its theme. Every child, or in fact every software developer, fears different imaginative monsters. 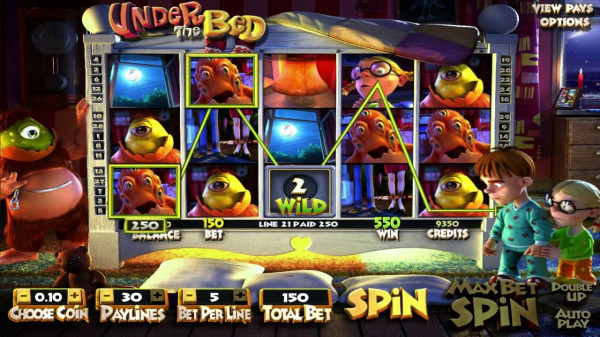 Among the symbols in Under the Bed are Jesse, the young boy, and Jane, the young girl. The siblings attempt to fight off the monsters underneath their bed at night. This story also plays a big part in the bonus game in Under the Bed. Yes, you heard right, alongside a surprise wild and multiplier feature, the slot game also comes with a bonus game.

Upon receiving at least three bed symbols, players are redirected to a bonus game. The siblings are sitting on their bed, and it's the player's task to pick a card from a total of five available cards. Every card displays a monster and a certain amount of credits. It is great when the monsters scare Jesse and Jane. This has been translated graphically in a very impressive fashion. The bonus game stops only then when a player receives the dreaded card with the kids' mother on it.

While this bonus game might not be as profitable as those in other slot games, especially jackpot slots, it is still my favourite feature in Under the Bed.

This is down to the fact that its graphics are impressive, and that a pick game always adds a little bit of interactivity to slot machines, which can otherwise get boring after a few spins.

The slot game has turned into quite a wild mixture of all types of creatures and funny-looking kids. The background, as expected, depicts a kid’s bedroom at night in 3-D design.

This BetSoft creation rivals some of the big picture houses when it comes to graphics. The slot game’s characters are so detailed, you’d almost think they were for real. The background music is eerie and the kid's yawning certainly adds to the spooky atmosphere, this slot game attempts to create. As a result of its expert design, Under the Bed deserves top marks for first impressions.

Of course, the BetSoft game comes with the usual features, max. bet and auto spin buttons. Given the highly interactive and versatile nature of the game, I prefer to play this slot game with a little strategy. First, I tend not to use the auto spin option and amend my stake as I go along. Bets start at 0.02 and go up to 0.50 per line. Players can choose up to 5 coins per line, making the maximum bet a median 150. While I say median, I do still think that this amount is quite risky. In fact, I would tend to only increase to such levels after a few good wins. These are common enough in Under the Bed. While the wins tend not to be gigantic, they are solid and come frequently.

Our Verdict on Under the Bed

Under the Bed scores highly in my books, thanks to the cute theme, and the great bonus game. The idea for the bonus game BetSoft created is fun and translates well into slot gaming. After all, it combines fantasy with real life; all slot games know, that this idea holds great appeal when it comes to playing casino games.