Join Captain America as he battles it out with Red Skull and attempts to take down Hydra once and for all.
captain america the first avenger casino game review jackpot slots playtech slots

This game is based on one of Marvel’s greatest ever superheroes....Captain America of course! He is one of the oldest and most popular of all of Marvel’s huge library of superheroes. I must admit that I was not a huge fan of this hero until the Captain America The First Avenger movie was released back in 2011. To summarise briefly, Captain America was a weak skinny soldier named Steve Rodgers who was given a super soldier serum that transformed him into a muscular athlete at the peak of his physical powers. I really enjoyed this movie and I was quite excited to see how it plays as a slot game. 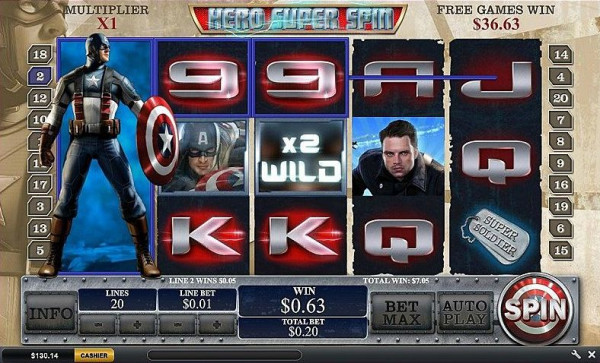 The first feature I noticed is that the Wild symbol is not just one but two symbols! It is denoted by a Captain America and a Red Skull symbol. Both substitute for all other symbols except the Free Games and Scatter Symbols. They are also the highest paying symbol in the game and if you are lucky enough to land 5 of these symbols across the reels then you will be treated to a lovely payout of 5,000X your total wager! Another cool thing about this symbol is that any win containing a Wild symbol is automatically doubled.

The Scatter symbol is denoted by Captain America’s famous shield and if you land 5 of these symbols then you will be treated to a prize worth 100X your total bet.

The last feature to highlight is the Marvel Multi-Level Mystery Progressive Jackpot. It consists of 4 progressive jackpots: power, extra power, super power, and ultimate power. All of these jackpots are won randomly and any spin of any amount can win entry to a jackpot game including non-winning spins. The higher the bet you place, the bigger the chances of entering this game so bet big and you might just nab one of these lucrative jackpots!

The game is beautiful to look at and more importantly play. If you are a fan of Cap then you are in a for real treat with this slot! The background is taken up by Captain America on one side and the scary looking Red Skull on the other, with Cap’s shield separating them. The symbols are superbly detailed and consist of Captain America, Red Skull, Bucky, Cap’s Shield and a few more. They run smoothly along the reels and give off a nice 3D effect when you land a winning combination.

The music is tense and quite atmospheric and it suits the superhero theme of this game nicely.


Our Verdict on Captain America - The First Avenger

Captain America - The First Avenger is produced by Playtech and it’s a fitting tribute to one of the greatest superheroes ever to grace a comic book or movie. I really liked how the features tied in with the movie and the Super Energy Free Games feature was a lot of fun to play. It is possible to win some really big payouts in this feature, especially when you have expanding wilds with some extra wilds thrown in. It’s a Medium variance slot so you won’t be waiting too long for a nice payout with this game.

Take down Hydra with Captain America - The First Avenger!