Fantastic Four 50 Lines from Playtech: Slot Review - it's clobbering time with this slot!

This game is all the superheroes known as the Fantastic Four. Now I am a big Marvel fan and was quite pumped to play this game and see if it does these four heroes justice. The Fantastic Four are a bunch of ordinary folk who were given extraordinary powers when they were covered in cosmic rays during a space accident. This group of heroes were given the blockbuster movie treatment in the past but those movies never fully captured what these characters are all about, especially the most recent movie released in 2015! 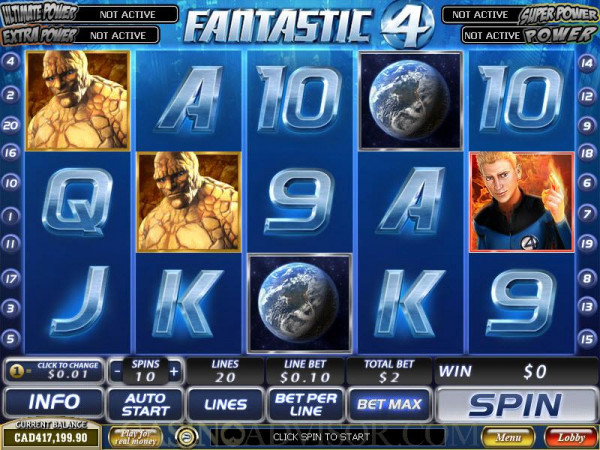 The first feature to mention is the Fantastic Four Wild symbol, it is denoted by the number 4 with a circle surrounding it. It substitutes for all other symbols except the Scatter symbol and it is the highest paying symbol in the game. If you manage to land 5 of these symbols across the reels then you will be treated to a handsome payout worth 10,000X your initial stake!

An image of the earth is the Scatter symbol and if you land 3 or more of these symbols anywhere on the reels then you will trigger the Free Games feature. This is really where the game comes into its own and it is the standout feature of this slot. First off, you are given 12 Free Games and reel 3 will become stacked with Hero symbols. Once reel 3 is fully covered with one of the heroes, it will trigger one of the following corresponding fantastic features:

The last feature to highlight is the four linked Marvel Progressive Jackpots. These include the power, extra power, super power and ultimate power jackpots. These jackpots are won randomly and any spin of any amount can gain entry to the Jackpot game. However, if you place a higher bet then it will increase your chances of entering the Jackpot game. Once you enter this game then you are guaranteed at least one of the four jackpots. The Jackpot game itself involves clicking on some squares to reveal Jackpot symbols, if you match 3 identical Jackpot symbols then you will win that Jackpot.

The game is a faithful representation of the Fantastic Four and I liked how the characters look very similar to their comic-book counterparts. The symbols consist of the Fantastic Four heroes as well as the standard A, K, Q, 10 symbols. They animate quite nicely, especially when you form a winning combination on the reels. I liked how The Thing bashes the screen window when his symbol is a part of a winning line or when Johnny Storm flames up the symbol frame.

The music is of the epic variety and a tad poppy, although there are not that many sound effects, it does suit the game rather well. Less is sometimes more, as they say!

The game has 5 reels, 50 paylines, an alright RTP of 94.90%, a maximum payout of 10,000X, and the chance to win from the Marvel multi-level mystery progressive jackpot.


Our Verdict on Fantastic Four 50 Lines

Fantastic Four is made by Playtech and it’s a wonderful representation of the Fantasitc Four. I really liked how they incorporated each character into the features of the slot. It’s a very easy game to get into and the chance to win from one of four progressive jackpots should entice lots of players to play this game.

Flame on and clobber everything with the Fantastic Four!