Second Strike by Quickspin is a five-reel slot machine. May sound bog-standard, but what is really behind the name of this slot machine? We at GamingRevolution tested the slot game and inform you of all the features you need to know to bag some serious wins in this Quickspin slot.
casino game review quickspin second strike slot machine slots

This game is kept pretty simple in design. Second Strike stars five reels and three rows, features classic symbols, such as the cherry, the melon and the ominous seven. As we have come to expect from a Quickspin production, autoplay is an option, as is a neat menu, which shows players their balance, chosen bet lines and allows him to amend these as he goes along in this slot machine. 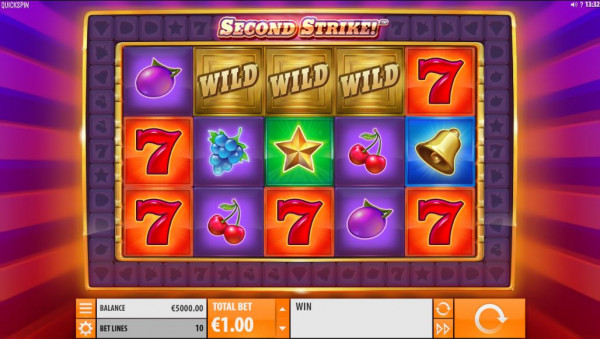 The main attraction of Second Strike is its high wins. Unlike many single-feature slot machines by Quickspin, Second Strike does not come with a flamboyant bonus game. Instead, this slot's outer wheel lights up with winning symbols on every win. A marker appears and spins around the wheel and stops at random. If it stops where the symbols are lit up, a player receives between six to ten extra symbols. This may sound complicated, but isn't really. In essence, this feature is what the game title describes: a second strike. A winner may win more via this feature. To be precise, this allows players to win up to 3,534 times their bet in a single spin. Clearly, Second Strike could have alternatively been named Double Luck.

Some developers have it with the colour purple. Purple features greatly in Quickspin's Second Strike. The game background is purple-infused while the game itself is a full-blown purple.
First impressions of Second Strike lead one to believe that this slot machine is well-designed, yet basic in its appearances. Rather than an imaginative soundtrack, Second Strike comes with a nuanced background tune, which is neither uplifting nor irritating. Anyone who plays slot games more frequently will know that this is very much a compliment!

I love using the autospin option in this game. Second Strike does not come with entertaining videos or bonus games that would require a player's absolute attention. That also means more fun when you just let the reels spin, bag a few wins and these double up (via the Second Strike feature). Ideally, players plan well. Decide how much you want to spend and pick your ideal play time. If you have had a few massive wins, a great way to increase them even further, without risking too much, is it to set a side a certain percentage of your win and gamble again.

Our Verdict on Second Strike

There is little more to this Quickspin slot machine than its name suggests. The second strike you get win in this slot machine is the defining feature of the game. However, as with many games that are rather simplistic, it works well and is much more attractive than many other feature-packed slot machines. For that reason, it is no surprise that the Quickspin slot Second Strike is one of the most popular online slot machines on the market and also comes in a sleek mobile slot version.